When it comes to fitting your child car seat, there’s still much debate about the best way to keep your little one safe in their seat. Many people say seatbelts are perfectly safe – if fitted properly – while others swear by Isofix mounting points. But which is safest?

We all know how seatbelts work. And how they’re designed to protect adults in the event of crash. And they work in exactly the same way when fitted to a child car seat. The problem is, they’re not always fitted to child seats properly. In fact, it’s a far more common problem than you’d imagine. Research by Good Egg Car Safety in 2014 tested almost 1700 car seats and found 67 per cent of them were incorrectly fitted.

Sometimes it can be new parents who aren’t familiar with their car seat but more often than not it’s actually those with older children who don’t realise they’ve been fitting them incorrectly for a long time.

When installed correctly, seat belt fitted seats are very safe. It’s also easy to switch the seat between different cars, plus if you have an older car without Isofix mounts, you can be confident your child will be safe.

So why Isofix then?

Independent tests show that Isofix mounted seats are extremely safe. Rather than relying on a belt, the car seat is fixed directly to the base of the vehicle seat. That means there’s less movement in the seat in the event of an accident, particularly a side on impact.

The real advantage to Isofix is that it’s so simple to fit. Research by Maxi-Cosi shows that 94 per cent of parents use Isofix correctly. Why? Well you just simply click in the Isofix legs and the car seat is solidly installed. Nearly all Isofix seats have green and red indicators to show you when the seat is fixed correctly. 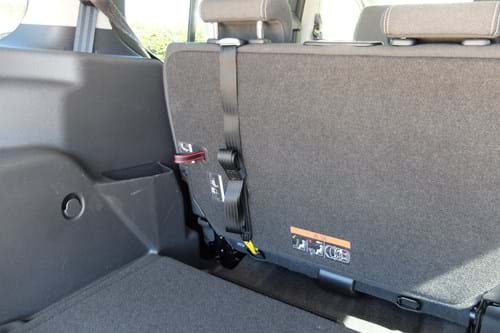 Add in a rebound bar and an extra leg support or top tether strap and the Isofix system feels incredibly secure. Booster seats can also be permanently secured with Isofix.

The disadvantage is that Isofix seats tend to be heavy and more awkward to swap between cars. They’re also more expensive to buy new and many Isofix seats can only be installed with Isofix points – there’s no seat belt option. So if you want to use your seat in a friend or relative’s older car, which doesn’t have Isofix, you may find yourself stuck.

How do I know if my car has Isofix?

If you’re not sure look for the Isofix labels or simply run your hands along the gap where the seat base and back meet to feel for the metal hooks. Two seater cars often have them fitted in the passenger seat although you do of course have to turn the passenger airbag off.

Ultimately it comes down to what method you – as a parent – are comfortable using and have confidence in. We would always strongly recommend using Isofix, there’s less chance of a seat being fitted incorrectly. But if you have an older car, it may not have Isofix fittings, then it’s important that you ensure the seat belts are fitted properly in order to keep your little one safe.