A TomTom sat nav for camper van drivers and those towing a caravan. This means you get all of the route and traffic features of the standard TomTom, with the peace of mind that the Go Camper won't take you on a route that will leave you stuck down a small road that isn't suitable for the weight and/or size of your van.

As with the majority of TomToms, world maps and traffic updates and safety camera locations are included at no extra cost for the lifetime of the device. The Go Camper also has full access to TomTom MyDrive, which allows you to download roadtrips, camping sites and stopover locations.

As well as featuring built-in WiFi, the TomTom doubles up as a handsfree unit for your smartphone via Bluetooth. It'll also connect to your phone’s data, to download new maps and updates. If you don't want to lose your mobile data allowance in a haze of sat nav updates, you can complete this process with the built-in WiFi each time you connect to compatible network. 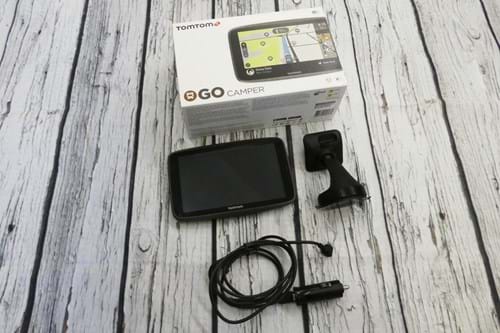 The TomTom Go Camper is a smart little device. The six-inch touchscreen is wide, colourful and bright - which makes it simple to read when on the move. The 6.0-inch, touchscreen nav can be attached to the windscreen or dashboard via a magnetic mount, which attaches the device to the screen with a simple twist of the mount.

You can also fit the TomTom to the dashboard with a sticky plastic disc that connects to the mount and releases in the same fashion. Just be sure not to fit the sticky disc to the windscreen by mistake - it's super, super sticky and in all likelihood won't come off. The built-in battery provides one hour of use and can be recharged by plugging the device into the vehicle’s 12V power outlet or USB socket.

Once plugged in and attached, you need to enter some vital stats about your camper van. This means the length, width and weight. You'll also need to tell the TomTom about the van's legal maximum speed. Once armed with this data, the router will do its best to avoid any roads that are not suitable for your van.

It'll also calculate the best route to fit your van's speed restrictions (if it has any) to ensure you get to your destination in the quickest, stress-free fashion. The Go Camper can be set to accommodate a light or large camper, as well as a car with a caravan. 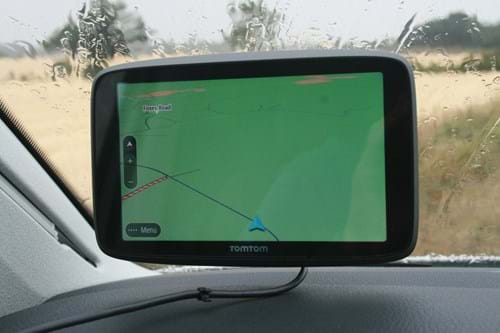 Using the Go Camper is easy, thanks to the large screen that has a light touch sensitivity that means you don't have to press particularly hard to use it. The route directions are among the best of any sat nav unit on sale today, with the device giving plenty of time to inform the driver of a turn or junction.

The little unit comes into its own when several turns in succession are needed, which means - for example - if turning left after a roundabout, the device will say: "take the first exit at the roundabout and then take the first left onto King's road before turning immediately right". This is particularly useful on busy roads, where sudden lane changes in a long wheelbase, high roof van might be difficult.

However, while the TomTom is great in town and on the motorway with live traffic updates and reroute options to avoid delays, it struggles when you reach the open countryside. During our test the TomTom lost signal on two occasion, with one instance lasting 25 minutes. This forced us to stop and revert to the old fashioned paper map to find our destination.

The camper routing - which is based on the van's size - was also problematic. The Go Camper took us down a few narrow county lanes and, admittedly, the roads were wide enough for the van but it became somewhat difficult when we met a vehicle coming in the opposite direction. 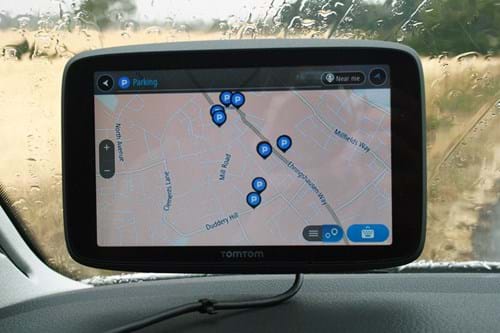 The TomTom Go Camper is a slick bit of kit with lots of useful features that take a lot of the hassle out of a long distance drive. The touchscreen tech in particular is impressive. In our view, TomTom’s touchscreen tech is as good as anything you’ll find in a modern car. The route directions are also accurate and well-timed, which makes the Go Camper a great companion on a busy motorway or town centre.

However, we found the signal drop to be a real pain when driving in rural areas. The camper van routes - which are customised to fit the van's size and weight - were mostly fine, but again the Go Camper was prone to the odd bout of confusion as it sent our van down single track B roads that would leave the door mirrors brushing against hedgerows and trees.

That said, route directions to camp sites and places of interest were faultless. We found the parking feature to be great for finding camper van friendly places to park up for a couple of hours to explore a town or village.

Priced at £380, the TomTom Go Camper is an expensive bit of kit and we’re not sure the additional functions really justify the extra cost compared to the cheaper Go 520 (£220) or Go 6200 (£299). If you own a smart phone and windscreen dock, you can access some excellent apps, which include the accomplished CoPilot Caravan that provides a similar camper van routing system as the TomTom for just £35. Pros Large and colourful touchscreen is easy to use and read Lots of useful features, including POI for camper vans Doubles up as a handfree phone
Cons Smartphone app will do the same job at a fraction of the price Suffers from loss of signal in rural areas Will still take you down the occasional narrow, winding road