Premium price, but it's one of the best

The Thule Easyfold XT 2 is a tow bar mounted bike rack that's designed to carry two bikes or a single electric eBike safely and securely. Unlike some of its rivals, the Easyfold XT comes fully assembled and doesn’t require any tools to set it up. It will fit any car, pick-up or van with a tow bar and 13-pin electric hook-up.

The rack weighs 18kg and features rear lights, indicators and number plate holder, along with a plug to connect the electrics. This means you can carry large mountain bikes, without worrying about breaking driving laws due to the wheels obscuring your vehicle’s number plate and/or tail lights. As well as ensuring you stay on the right side of the law, the Thule rack will limit damage because it sits a good distance away from the vehicle, which should prevent accidental bodywork scuffs from a wayward bike wheel.

To load, simply lift the bikes on to the rack, secure them with the individual frame clamps and fit the pump buckles to the wheels. The rack also features two locks, which secure the carrier to the tow bar and the bikes to the rack. As the name implies, the Easyfold XT 2 is fully foldable, which means it will pack away into a size of 63 x 68 cm. 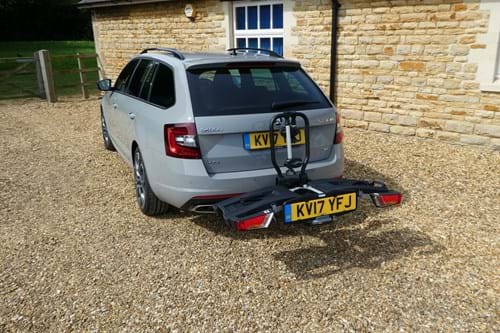 Thule has a proven track record when it comes to producing high quality racks and carriers for cars. The Easyfold XT 2 is no different, in the sense it looks smart and feels extremely solid. It also has a useful handle, which lets you carry it when it's folded up. Weighing 18kg, it requires a strong arm to carry, but it isn't as bulky or as heavy as some of its rivals. Especially when you consider that the rack includes electric fittings.

To fit the EasyFold XT2 you must have a car, van or pick-up with a tow bar that can carry more than 60kg. A 13-pin power connector is also required, to power the rear lights, along with a spare registration plate that can be fitted to the designated frame at the back of the rack.

Fitting the carrier is easy; you simply lower it onto the tow ball and then adjust a dial on the rack until it fits the mounting. When coupled, you close the tightening handle and lock it to the tow bar with a key that's included with the rack. The 13-pin socket is easy to set-up - you simply plug it in - and this relays the vehicle’s braking and indicators to the lights that are attached to the bike rack.

Once attached, you unfold the rack and then lift your bikes onto it. The bikes are easily secured via two integrated clamps that attach to the frame of each bike. There are also four wheel straps, which allows you secure each wheel to the rack. Once attached and secure, you lock the clamps (with another small key that’s included with the rack) and that’s it, you're ready to go.

Unlike some of its rivals, the EasyFold XT 2 features a full tilting mechanism, which lets you access the boot of the car. To tilt the rack, you push a central foot pedal and the whole thing moves forward. It also makes a reassuring clicking noise when it’s pushed back into place, to let you know it is secure once again. The rack will hold up to 60kg – 30kg per bike - while the distance between the bikes is 22cm, which should be sufficient for even large mountain bikes with frames stretching up to 80mm in dimension. 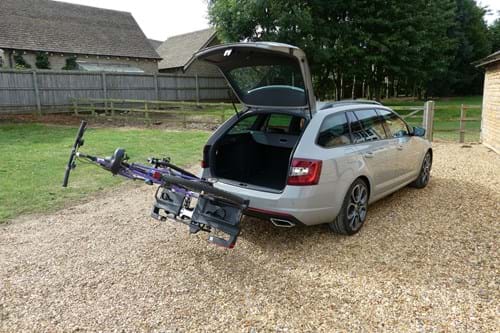 With prices starting at £470 (or £575 if you buy direct from Thule) the Easyfold XT 2 is at the higher end of the bike rack market. However, despite its premium price, it's one of the best. Not only does it feel extremely well made, with very few moving parts, but it's extremely easy to use. Indeed, within 10 minutes of taking it out of the box, we had it attached and wired up, ready for its first bike.

All of the locks feel durable and provide plenty of reassurance that you can park up and not have to worry about someone removing either the bikes or the rack from your car while you're away. We also liked the fact that there was a decent distance between the bikes and the back of the car, as this helps prevent scuffing the paintwork. The Easyfold's true party piece, however, lies in the fact that it can be folded away and stored in a corner of a garage or in the boot of a car.

While there are undeniably cheaper alternatives, we struggle to think of many tow bar mounted bike carriers that match the Easyfold XT 2 for quality or ease of use. Obviously, if you move a bike once every three months, this won't be the rack for you. However, if transporting bikes is a regular part of your weekend activities, the Easyfold XT will make a lot of sense. In our view it's the best on the market and well worth the expense for those who want to carry two bikes with the minimum of fuss. 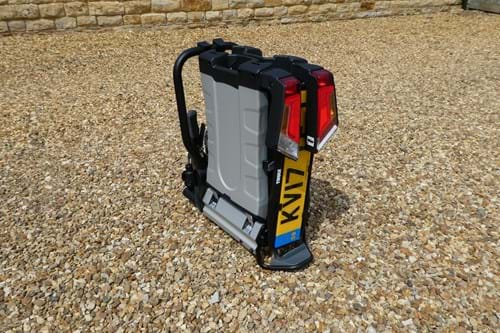