Smart, stylish and easy to use

You'll need somewhere to store it when not in use

That’s a huge leap over the 251 litres of bootspace the Volkswagen Up it’s fitted to here, adding real practicality to the compact city car. Not that it’s limited to small cars - the Thule Touring S can be fitted to any car, using Thule’s extensive roof bar and mounting kits.

On the Up the Touring S is mounted via a Thule WingBar 969 and Thule Rapid System 754. Combined, these cost £216. A cheaper SquareBar 769, again, with the 754 is available for under £170, while Thule offers SlideBar and ProBar options if your budgets are higher.

The Touring roof box range itself comes in a number of sizes. The S tested here is small, with M and L choices in 400 litre and 420 litre capacities respectively. There’s a Sport model too, at 300 litres and an Alpine at 420 litres, both being longer and suited to housing sports equipment like skis and snowboards.

The Touring range is offered with the black glossy finish here, or alternatively in a textured aeroskin lid. Likewise, the Aerobars can be had entirely in black as opposed to the aluminium and black finish here.

Thule is a respected, recognised name in racks and carriers for cars and that’s obvious with the Touring S box. Peeling off the protective packaging it’s supplied in reveals a deep, glossy shine - it's just a shame that the packaging the keys come in leaves a sticky residue under the roof box.

To fit the box you need to first mount the roof bars. Here, on the Volkswagen Up, that requires the Thule Rapid System 754. As the Up does without rack mounts or channels, this utilises a foot and clamp system that rests on the roof itself and clamps down into the door shut.

It’s worth taking the time to read the instructions properly, as it’s initially a touch fiddly, but once you’ve fitted one the rest follow relatively simply. 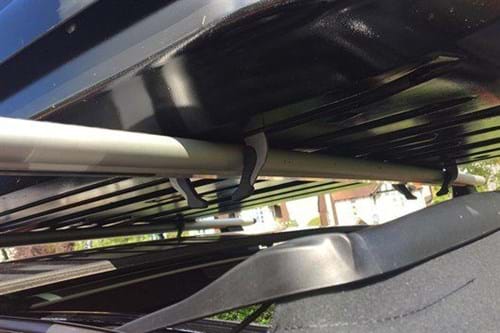 Fitting requires no tools other than those supplied, though installing the universal locks is easier if you have pliers to remove the plastic plug that covers the lock mounts. Fitting the locks is a case of push and turn, all four using the same key. That attention to detail is echoed in the neat placement of the tool for the mounts - it slots usefully behind the locked door at the bottom of the mount.

The finish of the mounts is impeccable, as is that of the bars mounted to them. The WingBars slot into the feet easily, a sharp knife (or scissors) all that’s required to cut the rubber strips that cover the fitting channels.

The bar ends are rounded and smooth, and, like the bar itself, shaped to cut through the air as efficiently and quietly as possible - Thule says it’s 55% more efficient than its old AeroBars. With them on (without the box fitted) there’s very little obvious increase in noise, even at motorway speeds.

The T-tracks allow a variety of accessories like bike, ski and other carriers to be fitted. They’re load limited to 100kg, but the foot mounts are lower at 75kg, while the Touring S box itself is limited to 50kg carrying capacity (it weighs 10kg unloaded).

Fitting the box to them is simplicity itself. The Touring S features slots through which Thule’s FastClick quick mounts slot. Push them into position and it’s simply a case of tightening the dials to clamp around the bar. It's a tool-free process and the twist dials click when the correct torque is reached. Once mounted, the Touring S can be opened and locked from either side and the car’s sunroof can still be opened underneath it.

The box’s lid opens and lifts easily, being light, but feeling robust. The floor has lashing straps to restrain any luggage placed within it. The box’s key cannot be removed unless all the locking points are securely closed, adding both to the security and safety.

With the Touring S in place there’s inevitably some increase in wind noise on the move, though it’s not so noticeable to be intrusive. Being high and wide it easily swallowed a full-sized suitcase and a carry-on one, with ample space for squashy bags, a pushchair and anything else you might want to carry. 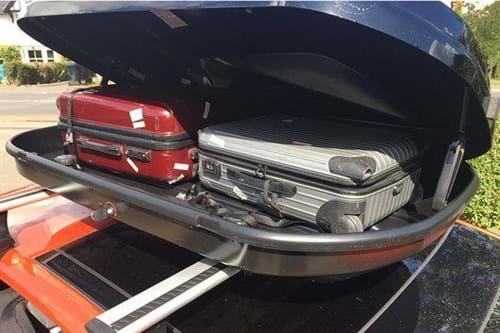 Even with two cases inside there's space to spare

The combined cost direct from Thule is £29 shy of £500, which might seem expensive, but the quality absolutely shines through. From the finish of the bars, foot mounts and the box itself, to the ease by which they’re all fitted makes it a worthwhile investment.

You could save a few pounds by fitting square bars if you’re unlikely to leave them on the car after use, though the saving is slight, and it’s difficult not to be seduced by their style and function.

Volkswagen offers its own roof bars, but they cost much the same and are specific to the car - with the Thule system you could take to a new car with new mounts.

If you’ve the luxury of a garage Thule offers a solution to hang it above the car when it’s not in use. There’s a wide range of accessories that can be fitted to the bars themselves, or within the box itself. If you can think it, or want to carry it, there seems to be a neat solution to do so.

The biggest issue is where to stow it when not in use, but that’s true of all its rivals. If you’re after useful extra space (whatever the size of your car) it’s difficult to ignore how well engineered Thule’s roof box and bars are.