Comes with a 5 year warranty

The catchily named LM1701E from EGO is a premium cordless lawn mower designed to tackle medium to large lawns up to 400m2.

The EGO LM1701E is powered by a 56-volt lithium-ion battery - a first for a cordless electric lawn mower, and can be charged in as little as 30 minutes. That's quick, but a little bit of the shine is taken off by the 20 minute run time with the supplied 2.5Ah battery. If that's not enough, EGO will sell you a 5Ah or 7.5Ah battery that deliver 40 and 60 minute charge times respectively.

The wide cutting width of 42mm means you can cover ground pretty quickly though, while there's a broad range of seven adjustable cutting heights that runs from 80mm to a Wimbledon Groundsman-pleasing 20mm.

The EGO LM1701E features a large 55-litre collapsible grass box that comes with a full indicator, while there's some front-mounted lights to help guide your way when it's overcast or at dusk.

Tipping the scales at 25kg, the EGO LM1701E isn't the lightness piece of kit, but if you have an undulating or sloping lawn, there's also a self-propelled variant available in the shape of the EGO LM1701E-SP.

Retailing at £449, it's a serious investment, but we've seen it available for just over £400. That's not forgetting the generous five-year warranty. 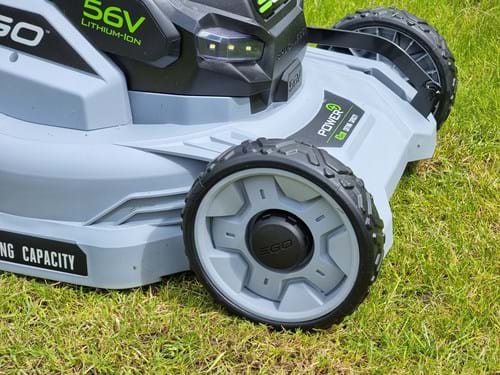 While you're doing that, put the battery on charge and you won't be waiting long before you can start cutting your lawn as it comes partly charged. Slot the battery into the mower under a plastic cover - you'll have to give it a good firm press to make sure it clicks in. You're not ready to go just yet as you'll need to insert the supplied key. Only then can you power on the EGO LM1701E. It's a handy safety feature to have, meaning that even if the battery's installed, without the key the mower won't start and is extra peace of mind if you have children nearby. 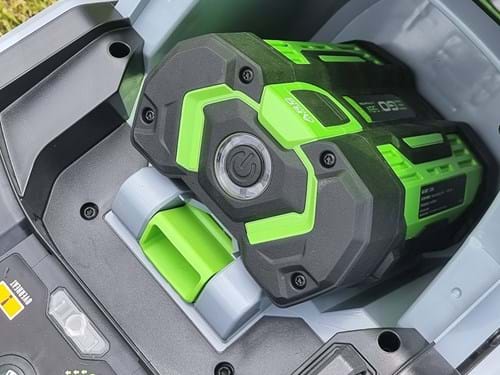 The telescopic metal handle has three positions depending your height, with a flip-lock locking system to fix the handle in place. Then it's on to selecting the cutting height of the EGO LM1701E, starting at a nice and short 20mm and rising up to 80mm. There's a large lever at the side of the mower to do this, moving the body (or deck in lawn mower speak) up and down depending on the setting used.

Starting the EGO LM1701E requires a press of the button in the centre of the handle before simultaneously pulling the lever and after what feels like an unnaturally long pause, the EGO LM1701E springs into life. 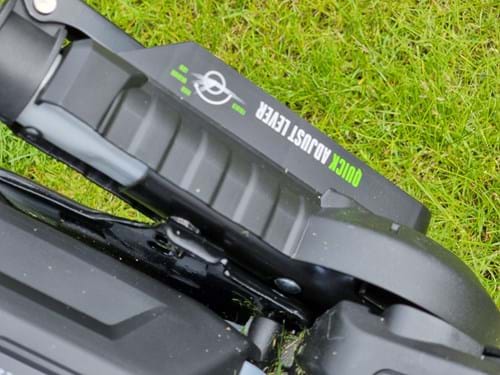 The large grass box is really handy, meaning you can make decent progress before you have to pay a visit to the green bin.

Despite the wide cutting width and 25kg to push about, the EGO LM1701E is pretty easy to manoeuvre. It's definitely a lawn mower that needs both hands to control it, but you can easily push it around the garden. You'll also appreciate how quiet the EGO LM1701E is compared to corded and petrol-powered mowers.

And what about battery performance? We happily cut both front and back lawns on one charge and while the combined area is less than the claimed 400m2 range of the EGO LM1701E, we didn't get any range fear that we'd run out of power mid-cut. And thanks to the rapid charge times, you're unlikely to be held up too much if you do manage to drain the battery.

Once finished, the telescopic handle can be collapsed and folded in on itself so the EGO LM1701E can easily be stowed vertically, while the handle can double as a wheelie handle, so it can be pulled around the garden easily if needed.

If you've been using a petrol lawn mower until now, then the EGO LM1701E is a real alternative for those with a medium to large lawn. It's well made, easy to use, quiet, and the charge times are some of the best around. If you've got a particularly large lawn, you might want to invest in a larger capacity battery.

At £449, it's certainly one of the more premium options out there, but the five-year warranty brings with it extra peace of mind and ultimately, you can't argue with the quality of the cut the EGO LM1701E delivers.