It’s a replacement tyre with run-flat capability. Normally, run-flat tyres are fitted from the factory by car manufacturers, so cars have bespoke suspension settings designed specifically to complement the tyres. DriveGuard tyres can be fitted to almost any car, on the proviso that it has tyre pressure monitoring, something all new cars must have by law.

Compared to an everyday tyre, DriveGuard has a much more durable and heat-resistant side wall, so in the event of a puncture, whether in the tread or sidewall, a driver can carry on with their journey at speeds up to 50mph, for a distance of 50 miles. That should be enough to get home or reach a garage.

In essence, that means drivers shouldn’t have to pull over and stop in a dangerous place, like on the hard shoulder of a motorway or on a windswept county road at night. Instead there is an alert via the tyre pressure monitoring system in the dashboard that a tyre is flat – then the journey can continue, albeit with caution and at a slower pace.

On the road there isn’t really anything that differentiates the DriveGuard from other tyres. Road noise is well-suppressed and ride quality is fine. The more rigid sidewalls give a touch more harshness over sudden road imperfections like potholes or speed bumps, but barely enough to notice or worry about.

We didn’t have an opportunity to test the tyres on low-friction surfaces like ice, snow or even in rain but TUV Sud, an independent tester in Germany, awarded DriveGuard the top A rating for wet grip and braking so there should be no cause for concern. In fact if you had no idea the DriveGuard was a run-flat tyre you would probably never tell.

That’s until it’s deflated, of course. At very low speeds, such as when pulling off a driveway or when crawling along in heavy traffic, there’d be no immediately obvious way to tell the tyre was flat, which is why it can only be fitted to cars with tyre pressure monitoring. However at higher speeds the deflated tyre affects the steering and gently tugs the car to one side. 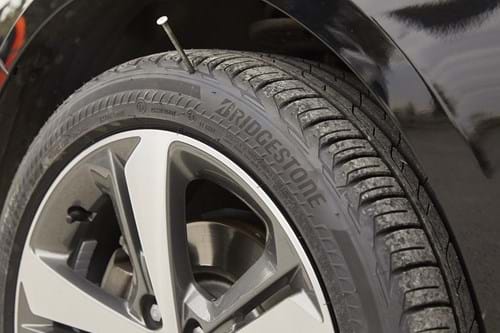 Still, it’s far better than having to stop at the side of the road and use an inflation kit or spare wheel. It does have limitations though - the tyre can only safely be driven when punctures are 6mm or smaller and in the event of a blowout drivers will still end up stranded at the roadside – though the same can be said of any tyre.

Depending on how damaged the tyre is and the location of the puncture, it's possible to repair some damage even after the tyre has been driven without air. Any garage equipped to repair wheels should be able to repair the DriveGuard without any special equipment or training.

Currently the DriveGuard is only available as a summer tyre, but a cold-weather version will arrive in future and it’s expected to carry the same premium of around 10 per cent over standard Bridgestone winter tyres. It could be a real clincher for some drivers, since it should prevent getting stranded on a cold winter night.

Bridgestone pointed out the potential eco-benefits of the DriveGuard, since it means a weighty spare wheel and wheel brace can be left in the garage, potentially yielding better fuel economy. That’s not really necessary, of course – but it’s an added bonus.

DriveGuard pricing is still to be fully confirmed, but is expected to be about 10 per cent more than typical premium touring tyres like Bridgestone’s own Turanza. Obviously the price you pay depends on the supplier, rating, fitment and other factors, but the premium for some added peace of mind isn’t exactly huge.

The only sticking point for a lot of drivers is the requirement for a tyre pressure monitoring system (TPMS) to be fitted. It’s now mandatory for car manufacturers to fit TPMS, so many drivers will already have it – but owners of older cars won’t be able to take advantage of DriveGuard.

For drivers who have struggled to replace a wheel at the roadside in the past the DriveGuard is an ideal tyre. It offers the same kind of performance and grip as any premium tyre, but with the additional benefit of runflat capability. A relatively small price jump versus a regular tyre just sweetens the deal. Bridgestone’s Weather Control A005 is one of a number of all-season tyres that are blurring the lines... FOBO is a tyre pressure monitoring system that works via a smartphone and Bluetooth. Each tyre valve...