Designed for those with small gardens/patios

Char-Broil's All-Star 120 B-Gas BBQ is, as the name suggests, a gas grill that features plenty of useful touches like hooks to hangs tea towels or cooking utensils and hinged side trays. The BBQ is also intended for barbecuers with limited space or those who want to take it out with them thanks to a clever design that allows separation of the grill from the trolley - so it can be a full height BBQ or sit on a table.

Once set up, the gas BBQ does a very good job - cooking meat perfectly and not taking up too much space in a garden or on a patio - even when it's at full height. However, you'll have to get past the frankly fussy assembly to get there...

The Char-Broil All-Star 120 B-Gas BBQ is a bit of a mouthful to say and, unfortunately, it's similarly as fiddly and difficult to put together towards the end of the set-up process. The entire assembly took us around two hours - which is far longer than we expected. 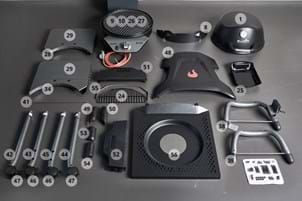 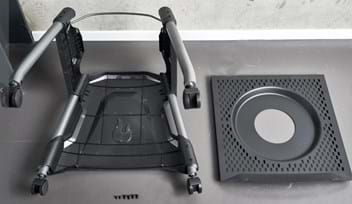 To start with, the All-Star 120 is an easy enough set up - we just attached the metal legs and wheels to the plastic body and screwed them in. There's even a helpful digital assembly guide on the website here. However, once we moved onto attaching screws into the metal body of the BBQ - we found that they didn't fit properly or go in as far as necessary because of bad build quality.

In fact, the photo on the left (above) shows the bottom shelf of the BBQ - which a gas canister is supposed to sit on below the grill. But the angle of the metal shelf is different to the angle of the plastic section of the trolley that it's supposed to screw onto, meaning we spent over 30 minutes just bending the metal trying to get it to fit. After 30 minutes we'd managed to screw in one of the two screws in and then gave up.

This issue of pieces not fitting together came up a couple more times throughout the building process and, while the BBQ worked well when we eventually got it together, it was so irritating that we almost threw in the towel. In fact, had we not already invited friends over for a Bank Holiday BBQ, we probably would have just packed it away. 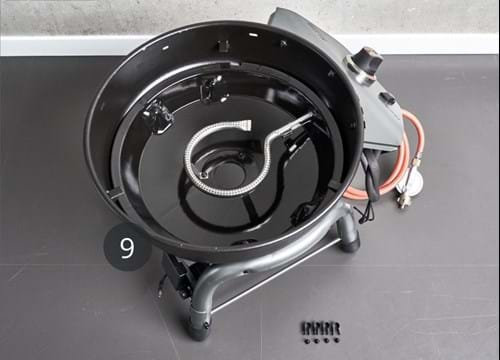 However, once set-up, the BBQ does do an excellent job of cooking food. It features a 46cm, rust-resistant, cast iron grill grate with a corrugated heat-distributing TRU-Infrared sheet directly beneath it, which is heated using an indirect heat system that sits above the burner. This redistributes the heat evenly over the whole surface - producing some very juicy burgers.

On top of the grill is a heat-retaining, cast aluminium lid with a thermometer on the front so you can get the grill up to the exact temperature you want (up to 350°C) before you start grilling.

Char-Broil recommends cleaning the infrared sheet after each use to prevent a build up of grease. The best way to do this is to leave the gas on high for about ten minutes to carbonise the grease and other detritus. Then simply brush off the powdered remains. The cast iron grill grate is easy enough to clean in the sink because food doesn't stick to it.

On each side of the grill is a foldable shelf that's more than big enough to hold packets of burgers and sausages, corn, halloumi or whatever else you want to keep nearby. On the underside of the shelves, there are some hooks to keep any BBQ utensils or tea towels you want to store out of the way. Other thoughtful design touches include somewhere to store a kitchen roll and a mini bin. 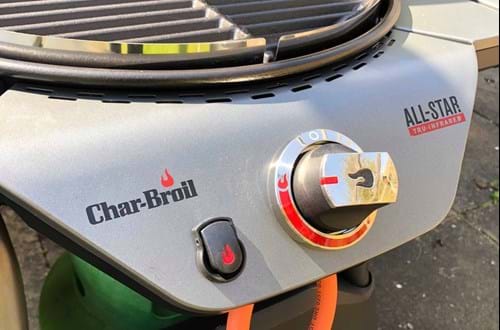 The BBQ fires up instantly using the battery-powered, push-start Surefire Electronic Igniter. However, we wish the massive box the BBQ came in would have included the four AAA batteries we needed to use the igniter. It would have saved us a last minute trip to the shop once we realised they weren't provided. In terms of mobility, the BBQ has a little plastic wheel on each leg. It isn't that easy to move around but it's definitely easier than having no wheels  - plus, there are parking brakes in case you're worried about it rolling away.

The top half of the barbecue comes with its own short, metal legs and can detach from the trolley to sit on the ground or a table. To us, the entire idea of detaching the BBQ from the bottom half is a bit of a novelty considering it's far more practical to use the entire unit together (it's taller but doesn't really take up any extra space and the trolley keeps the gas canister out of the way). In addition, it's not actually that easy to take the two sections apart because its four sturdy rubberised feet are now firmly lodged into the trolley legs. 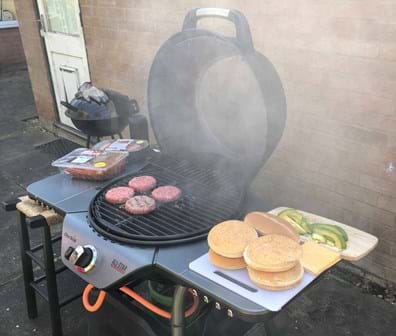 Unlike most products, we're in two minds about the Char-Broil All-Star 120 B-Gas BBQ. Aside from a name that makes us feel as though our tongue has doubled in size every time we say it, the assembly was irritating enough to make us want to give up. However, having said that, the BBQ itself does a very good job of quickly and evenly grilling burgers, sausages and ribs - as well as the corn we grilled. And isn't that the most important job of a BBQ?

There are some very useful design features, like the side shelves and hooks that meant we didn't need to awkwardly pull out a table to rest the food and spatula on. The BBQ is also exceptionally easy to start up one assembled, with the thermometer meaning we could just wait until the grill reached the desired temperature and then we left it all to cook without checking on it too much.

For those reasons, we'd recommend the 120 B-Gas to anyone looking for a gas BBQ that isn't too big, despite the fact that we think the idea of separating the two sections to save space is a bit gimmicky. The BBQ isn't very portable, but could feasibly be used for those who want to take a proper grill with them in a camper or caravan. If you can afford it, we think it's a very decent unit. If not, the Campingaz Party Grill 600 is a great portable BBQ.

Warranty: 10 years on the burners and the enamel on the plancha grill. 2 years on all other parts.