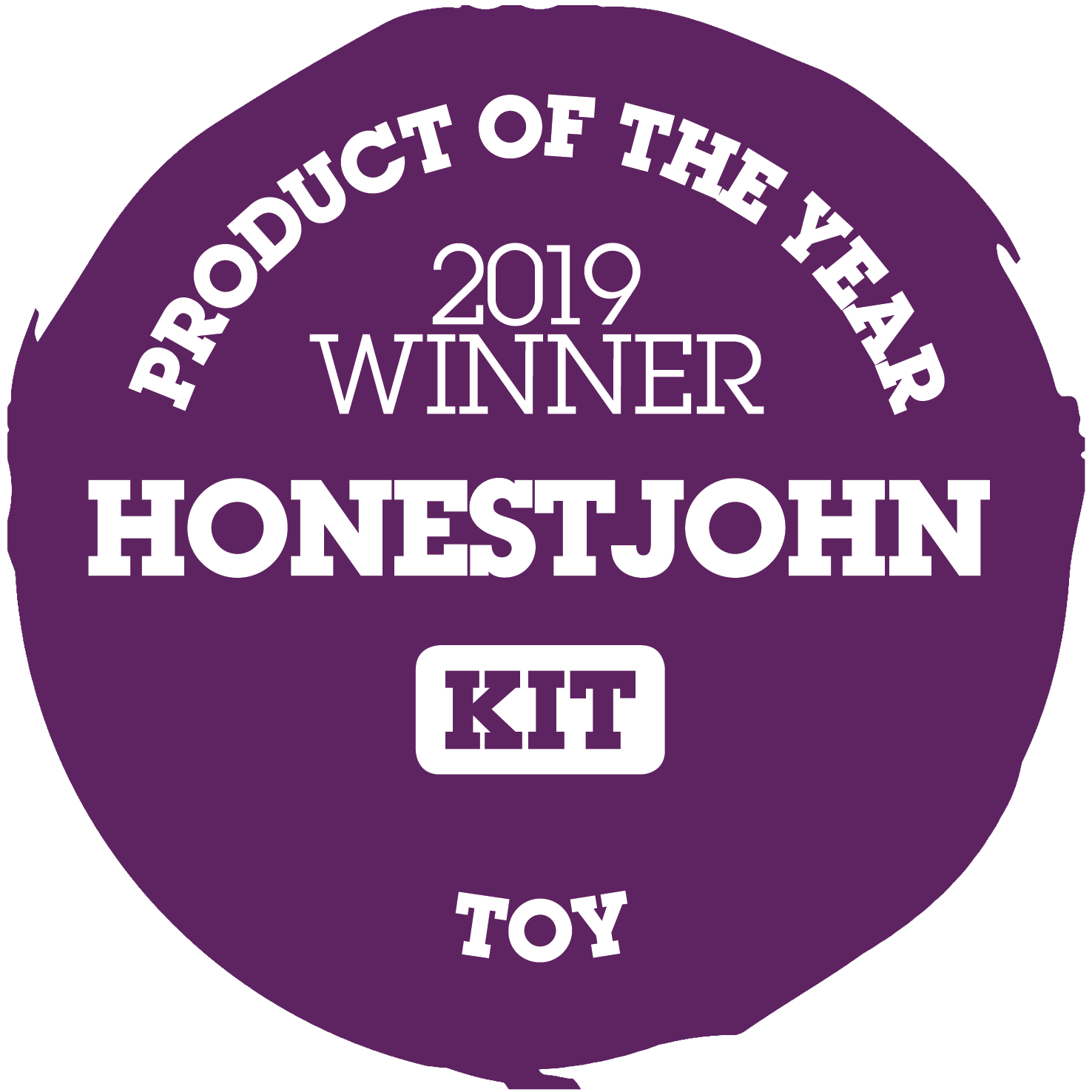 One of the cheapest e-skateboards around

Perfect for kids and skateboard novices

A considerably cheaper electric skateboard than most others on the market. Of course, there's more to it than that, but this offering from Razor is far less costly than rival electric skateboards - which is one of its main selling points. It goes up to 10mph (16kph), lasts 40 minutes on a single charge and is suitable for ages 9 and up with a 220lb (100kg) weight limit - which makes it suitable for this 24-year-old reviewer and our younger product testers.

Basically, it's a great entry-level e-skateboard - making it ideal for kids and skateboard novices. In fact, we think it's one of the best options to get to grips with the world of electric skateboards (and skateboards in general). Just don't try to use it for stunts...

The target demographic of the Cruiser is kids aged 9 and up. But if you're a little (or a lot) older than that, don't be put off. The e-skateboard is aimed at beginners, so it's got various design features that make it much harder for you to fall off - which is great if you've never ridden before or it's been a few years since you last hit the skatepark. However, we did enlist the help of a couple of young product reviewers; Summer (9) and Francesca (10) to see how they got on with it, too. 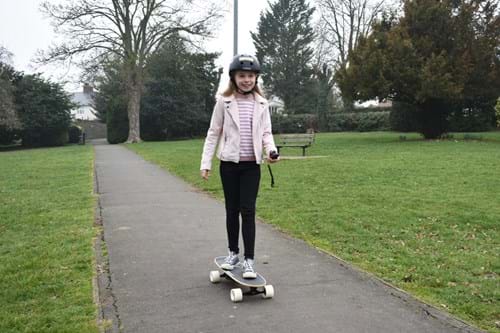 The almost 30-inch (754 mm) plywood deck provides a lightweight, sturdy ride that works best when cruising down a flat path. It's long but not quite as lengthy as a longboard. This also makes it easy for kids to get to grips with standing on it and getting used to shifting their weight around to control it.

"The more time I played on it, the more confident I got. By the end, I was going quite fast." - Francesca, age 10

The 125-watt motor sits underneath the board and isn't exceptionally heavy, but the weight and the length of the board do make it a bit of a challenge for kids to lug about. It might be a bit of a "mum, can you carry it?" situation. On the plus side, the motor only controls one rear wheel - which means that after 40 mins or so when the board runs out of juice, it's pretty easy to kick-push like any other skateboard.

The Cruiser's acceleration and braking are controlled using a wireless 2.4Ghz remote that comes with a wrist strap, which makes this an excellent beginner and kids' board because it mitigates one of the main fears that skateboarding novices struggle with: worrying about falling off at speed. 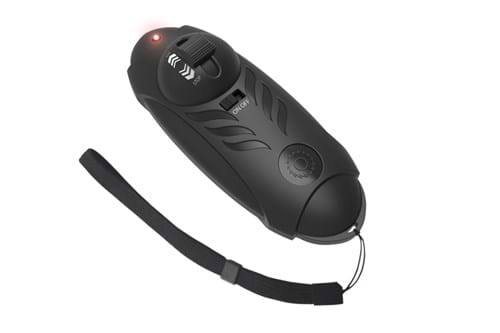 It's not the most modern design, in our opinion, but it's easy and lightweight to hold while riding - so it serves it's purpose well. On the remote, there's a variable-speed lever to push up and down for speed control and braking - the board can brake fairly fast if you push the lever quickly, and slower if you're a little bit more gentle. Going down a hill too fast and starting to get a bit scared? Just pull the lever gently with your thumb and the motor will lessen the rolling speed of the wheel. The remote doesn't control direction, though, that's up to you.

A really nice safety feature is that the board's motor won't kick in until the board is already moving. This is one of our favourite design touches because it takes into account another fear that prevents both adults and kids from getting on a skateboard: the fear of having the board fly out from underneath you when you get on. It essentially means that the board won't start moving unless it's already moving, even if it's barely rolling.

Our young product reviewers struggled a bit with using the remote control while also concentrating on balancing on the board, but it didn't take them long to get the hang of it. 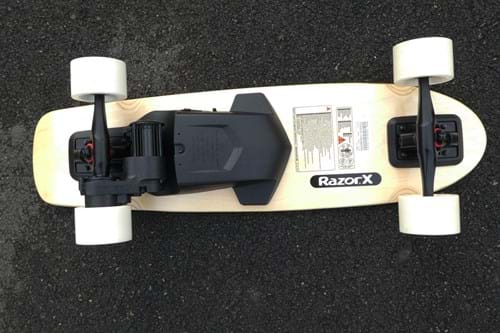 Unlike the small wheels on a traditional skateboard, hitting pebbles and whatnot with the chunky wheels on the Cruiser won't send you flying off the board. The reverse kingpin trucks and perforated grip tape also make the RazorX Cruiser a great beginner board.

"It's a very fun toy. Once you get lots of practice, it will be the most fun thing you have ever played on." - Summer, age 9

For some, the Cruiser will leave you wanting more. While the board can reach top speeds of 10mph (16km/h), it will struggle if you're a bit heavier. It's made with children in mind, after all. It also struggles with going uphill, even on slight inclines - so it's best for those with lots of flat, smooth paths available to them. A smaller issue, but one that may bother you in the long run, is the high-pitched whirring noise that you can get a listen of in the video below.

Another consideration to bear in mind is that the remote control requires a battery, which comes in the box. But the battery compartment is locked with a screw, which we can only assume is done so to prevent the battery from falling out and making the motor stop while you're riding. You need a little screwdriver to get the battery in, so don't think you can just go buy the Cruiser and have a ride around the store car park.

Especially considering it'll also need time to fully charge for your 40 minutes of e-board fun. A battery indicator on the underside of the board, next to the power button on the motor, will let you know when it's running low on power and, similarly, when it's fully charged.

There are some issues regarding the legality of e-skateboards, much like electric scooters. You can read more about that here, or ask us a question if you're still a bit confused regarding the law. To cut a long story short, an incredibly out-of-date 1835 law surrounding footpath use means that if you're caught riding electric skateboards, e-scooters etc on roads, pavements and in parks, you risk being fined if caught by police.

We're not entirely sure why the UK has yet to embrace the laws that other countries are adopting in regards to various forms of transport. However, the Future of Mobility consultation is examining new methods of transport to consider how the UK's infrastructure might adapt to these new technologies. So things could be changing in the not-so-distant future. We've heard police are fairly tolerant as long as you're respectful to pedestrians though, so just don't go riding ridiculously fast in busy areas and you should be okay.

After all, thousands of e-scooters and e-skateboards were sold to UK residents last year and you see them all over the place in big cities... 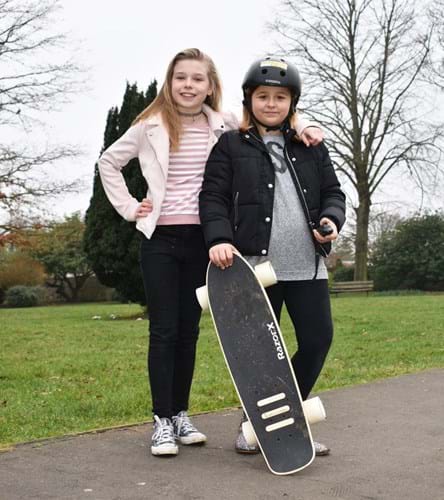 In short, yes. If you're looking for a fun toy to mess about on for you or your little ones, and don't fancy being an adult on a scooter. It's clearly a beginner board, which isn't a bad thing. In fact, we think it's the best value, entry-level e-skateboard you can buy - and it doesn't cut corners on quality to get there.

If anything, you might find yourself wanting something faster after using the RazorX Cruiser, so beware of that money pit. Our young product testers also loved playing on it. If you want a nostalgia kick of your teenage years hanging around skateparks, with the upgraded fun of a motor - it's ideal. Or, if you have a youngster who loves scooters, bikes and the like - this won't break the bank. Just be sure to wear a helmet (plus, knee and elbow pads).

Run Time: Up to 40 minutes of continuous use The E-Prime is Razor's newest electric scooter. It was nominated in our Scooter of the Year category...

A scooter, of course. The Flex Deluxe has the largest wheels (200mm) in Micro's adult scooter range...