Suitable for 3 years and up

Alongside its full-size sets that are popular with older kids (and more likely grown-ups), Scalextric also has Micro sets, aimed at younger children, from four years old. With smaller cars - 1:64 scale - and the emphasis on fun rather than realism, there are several sets including the Scalextric Micro Wacky Races one we're testing here.

Priced at £55, it comes with two cars - the Mean Machine driven by Dick Dastardly and Muttley plus the Turbo Terrific driven by Peter Perfect. You can also add Penelope Pitstop's car, the Pink Pussycat, which is sold separately for £13.

The mains powered set has more than four metres of track and there are nine suggested layouts that include a loop-the-loop or a vertical stunt ramp. The cars feature the Magnatraction magnetic system to help the cars stick the track plus there are two hand controllers which can be adjusted to limit the speed. 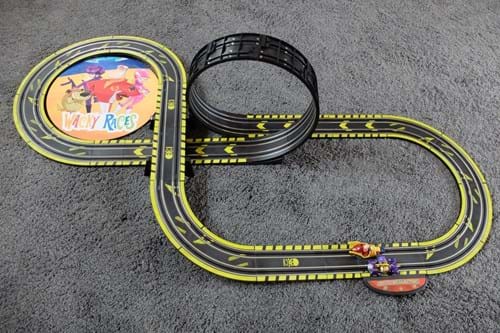 With more than four metres of track and nine suggested layouts, the Micro Scalextric has lots of variety, although we started with the standard layout (pictured above). Putting the track together is easy. If you're familiar with full-size Scalextric, it uses exactly the same locking mechanism, with the sections of track slotting together. But even if you're not, it's very easy to fit together.

It's not so easy that a four or five-year-old could do it without some adult help, some sections need a little force to get them to slot together tightly. The good thing is that once constructed, it's very robust and will stay in once piece even if you move it from room to room. And that's handy as it takes up a fair amount of floor space.

What makes this stand out from the traditional full-size Scalextric sets is the loop-the-loop, which was definitely the part which created the most interest among our group of four and five-year-old testers. You can swap this out for a vertical stunt ramp, although our lot all agreed that this was nowhere near as much fun. 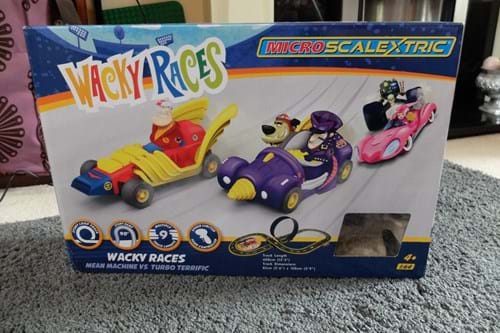 The two cars in the Wacky Races set are the Turbo Terrific (which we're sure was much longer in the cartoon...) and the Mean Machine, complete with Dick Dastardly and his sidekick Muttley. There's lots of detail in both cars and the strong colours give them plenty of appeal - they certainly have more character than the Justice League set. They're well built too and stronger than they look, surviving plenty of excursions into the skirting without breaking.

You can also buy Penelope Pitstop's car for a reasonable £12.99 to add to the set and it would be great to see more cars from Wacky Races made available. The Ant Hill Mob and Professor Pat Pending, anyone?

The cars are fitted with the same Magnatraction system as full-sized Scalextric cars - this is basically a magnet in the base of the car that means it 'sticks' to the track better. You can get some serious speed up and the little cars will whizz around corners and take the loop-the-loop with some pace. This may be a set for children but it doesn't feel dull or watered down. 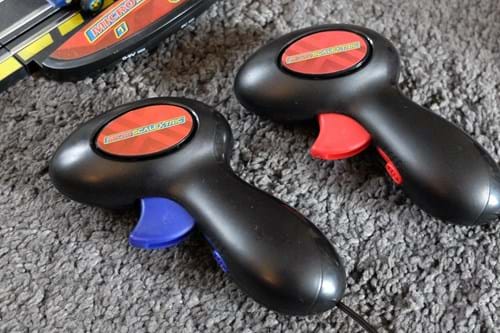 Go too quickly and they will still fly off at corners (or through the loop) which is, of course, all part of the fun. Usefully, you can limit the speed of the cars on the hand controllers. It's simply a plastic lever that stops the trigger being pulled as far, although when we tried this, all of our testers wanted the maximum speed available. Kids these days...

What we found though was that our little testers soon got the hang of it and were keen to make the cars race around, tackle the loop-the-loop before slowing down for corners and trying to complete laps without coming off the track.

The cars are also fitted with easy change pick-ups and you get two spares in the set. The cars endured a lot of abuse from our testers (including being pushed along carpet), so we imagine these spares will be used sooner rather than later. Swapping them is simply a case of unclipping the old and slotting in the new ones. 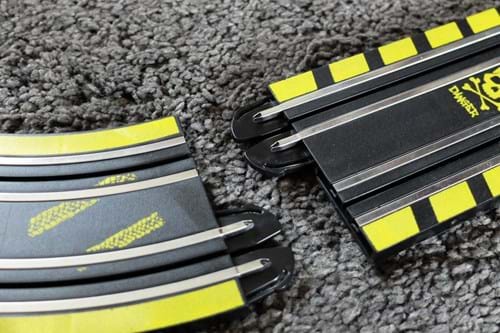 At £55, the Micro Wacky Races set may seem pricey but it's good value considering how much track you get along with the two detailed cars. It's also cheaper than alternatives like the Carrera Go Mario Kart set - and much better quality too. We particularly like the loop-the-loop which is great fun and the bit kids (and adults) will enjoy the most, while the various track layouts give it plenty of play life.

While this is designed for younger children, there is still an element of skill involved in keeping the cars on the track - and they're surprisingly fast. We expect most children will be just as happy to see them whizzing off at corners but that's no problem as the slot cars are robust and can take quite a whack.

Of course, whether that many four-year-olds are familiar with Wacky Races is another matter (having to explain who Muttley is can be a challenge...) but of the various Scalextric Micro Sets, this is certainly the one we'd choose and it's proven a favourite with our testers, down in no small part to the brightly coloured and characterful cars. It may not be a Nintendo Switch, but there's something fun and exciting about Scalextric which still has appeal and not just with those who remember it from the 1980s. 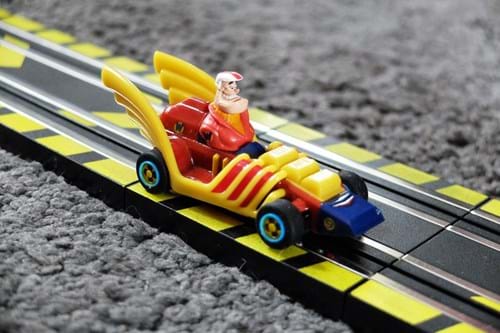