Up to 10 devices can be connected

Available on a range of PAYG and pay monthly data plans

EE’s in-car WiFi leaves nothing to the imagination in the name department. Buy this widget for your car and you’ll have the luxury of WiFi wherever you go, as long as there’s signal of course.

You get what looks like a glorified gearknob, but this is the crucial bit that provides the connection. Plug one end in to your 12v socket to provide power, start it up and once it’s connected to the EE network it provides a wifi signal just like your router does at home.

You can connect up to 10 devices at once, which even if you have a seven-seater should cover all eventualities, although it’s worth bearing in mind that the more devices you have connected, the slower the connection will become.

Just like your mobile phone, the signal will vary as you drive along, so don’t expect flawless Netflix streaming in HD as you pass through a Welsh valley – although EE claims to have the best 4G coverage in the UK.

As well as offering WiFi, the plug-in device (called Buzzard 2) has a USB port on the back so you can charge a device at the same time, although this may not be enough depending on how many 12v sockets you have and devices on the go at the same time.

Another thing to be mindful of is the shape of the Buzzard itself. It’s 88mm high, and although it’s a little bit shorter than that once its plugged into your car you may find it gets in the way of the gearlever or other controls depending on where you 12v sockets are. It’s best tucked out of the way if you can. 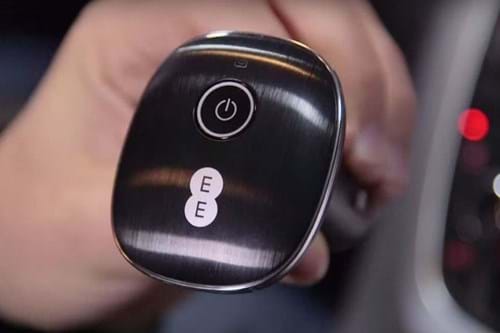 The other thing you need to do is choose a plan. As with a mobile phone there are a baffling number of options to choose from. On PAYG you pay £59.99 up front and have a choice of 2GB, 10GB or 20GB included, and with the latter two the included data lasts 90 days rather than 30 – although it seems daft to choose anything other than the biggest data package.

Alternatively you can sign up for a full-house 24 month contract, pay nothing upfront and get 2GB for £12 a month, 4GB for £10.50 (which looks like a mistake but it is actually cheaper than the 2GB plan) or 15GB for £23 a month.

As with any mobile phone or tablet purchase, think carefully about how often you’ll use it, how much data you will use and what you can afford to pay. For occasional use on family holiday the PAYG option would seem the most sensible as it will cost you nothing when it’s not being used. As an alternative to using your phone as a hotspot it makes some sense, but if you don’t mind doing so you can probably live without one.