Review: How To Be A Motoring Journalist by Roy Lanchester
reviewed 8 Jun 2018 by Mark Nichol

Richard Porter’s tale of fictional motoring journalist and bombastic curmudgeon Roy Lanchester. Porter was the script editor for Clarkson’s Top Gear (and now for The Grand Tour) and, among other things, runs the Sniff Petrol website – a satirical motoring website whose contributors (allegedly) have included Clarkson and James May. It's The Daily Mash but with cars, if you like. Lanchester is one of its most popular characters.

The book is structured part autobiographically and part as an educational toolkit, and while in the latter sense it's an alarmingly realistic window into the purview of the British automotive press. The former is, of course, of no use whatsoever - unless you want to become a sexist, racist, antiquated sort of motoring journalist. And there are enough of those already, thanks very much. Just joking. Sort of.

Lanchester is a verbose character whose demeanour sits somewhere between Alan Partridge and Basil Fawlty, plus 20 years or so. The result is a book packed with genuinely hilarious moments, but which can also be quite meandering at times, as Roy’s stream of consciousness usually takes him down an anecdotal rabbit hole. For example:

“While we’re talking about writing, I should also add a note about deadlines. These are the dates by which a newspaper or magazine will expect your words to be delivered and woe betide you if you miss this date, as you’ll probably get a whinging call from some mouse-faced cretin like Wesley demanding to know where your work is, at which point claim to have a migraine, even if you don’t suffer from such things, as they’re only for women.” 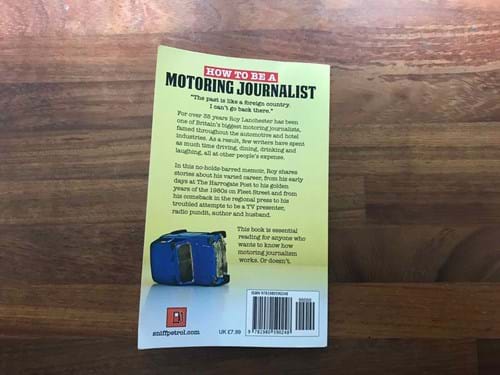 The life and career of Roy Lanchester, beginning with his early days as a regional motoring hack and later structured more as a journey through modern motoring journalism. Through that, we're taken from the smokey offices of regional newspapers, through the glamour of international car launches, and the murky worlds of celebrity and car company PR among other things.

Lanchester’s calamitous nature and the way he describes his thoughts and misdeeds are where most of the laughs are. (On the Millennium Bug: "…there was something else significant about the start of 2000 in Lanchester Land because, in January of that year, I returned from Thailand with something new, and I don’t mean herpes this time!”)

The particularities of motoring journalism itself - its mechanisms, people and places - are impressively realistic and well observed though, albeit they're fed into a Spinal Tap machine. It's clear that Porter is a veteran. And a very funny one at that.

Absolutely, given it’s focused on a protagonist with virtually zero redeeming qualities, the absurdity of HTBAMJ is strangely gripping. And it contains a beautifully accurate overview of the worst excesses of motoring journalism, should you be interested in those. It's also less than £8 - so you won't be out of pocket too much if you do hate it.

“If you think that motoring journalism is simply about driving around in other people’s cars and then going back to the hotel for a wine and a big dinner and maybe a dump and then some more wine and perhaps a whiskey or two, I’m afraid you are not completely correct.”