Most powerful version of Honda Vision

One of the world's most popular scooters

What a difference £200 and 58cc extra make to the Honda Vision. Where the 50cc model that costs £2199 is about as exciting as filling out your council tax forms, the larger-engined 110 model is an altogether more engaging prospect for £2399.

Okay, the Vision is never going to be a rock ‘n’ roll star of the scooter world. It’s not even a flash in the pan reality television celebrity, but that has more to do with its long-lived appeal as the spiritual successor to the 100 million-selling Cub line from Honda.

So, the Vision is more worthy than wished for, but that doesn’t stop its underlying traits from impressing anyone who needs to get about town with no fuss and with the least cost.

Let’s start with the obvious difference to the smaller capacity Vision: the engine. With the 110 model you get an air-cooled four-stroke single-cylinder motor that punts out 8.7PS and 9.0Nm of torque. Crucially, both of those figures are easily more than twice what the 50cc model manages. We can discount the extra 2kg the 110 weighs compared to its smaller-motored sister and state the performance is like crumbly old chalk and a particularly fine cheddar. 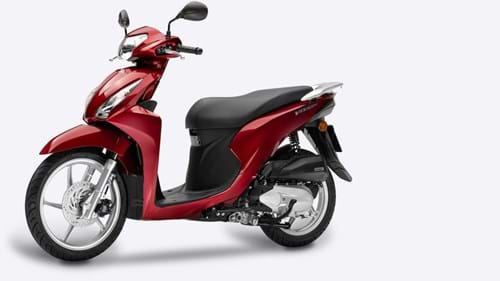 On the road, the gap in ability between the two Vision models is even more apparent. Where the 50cc model struggles to get off the line and yawns its way to 30mph, the 110 steps off the mark smartly and the speedo needle briskly passes 30 and heads on to 40 when limits allow. Pushing beyond that takes a little more effort and concentration, but you can wheedle 50mph out of this Honda, which means commuting longer distances is feasible, though we wouldn’t want to ride on dual carriageways.

The CVT transmission is as simple as any other twist and go scooter, so the more you rotate the right-hand control, the quicker it goes. The same drama-free interaction applies to the brakes, which use the same bicycle layout as most rivals to the Vision. However, Honda supplies this model with its linked brake system, so when you pull on the front brake disc, the rear drum also plays its part to offer stable, assured stopping.

Elsewhere, the ride is much the same as the lower powered model, so you have decent comfort thanks to the 16-inch wheels on most roads, though rougher surfaces soon wrong-foot the single rear shock absorber. Mercifully, the front is more supple and holds the tyre to your chosen line.

The turning circle is good, though the Vision doesn’t feel quite as agile zipping through gaps as some of its opposition like the Peugeot Tweet. Still, the Honda’s mirrors only extend slightly beyond the width of the bars, so it’s easy to judge which openings you can get past without risking a loss of paint or face.

As with the 50cc Vision, the riding position is good, you have a flat foot board that lets you carry bags between your legs and a full-face helmet will just about squeeze below the flip-up seat. If it doesn’t, there are two securing hooks, on either side of the seat, while cubbies in the inner front fairing offer additional but unsecure storage. A pillion gets fold-down foot pegs and enough comfort for most cross-town journeys.

Lastly, we come to cost. That extra £200 on the purchase price to bag yourself the Vision 110 instead of the 50 is money very spent in our book. It’s also no more costly to insure the 110 and it holds it value better as more riders will want to take it off your hands when you sell. Throw in real-world fuel economy of 120mpg and a 150-mile range and it’s a sound bet for un-fancy city riding.