While robot vacuums used to be clunky and expensive machines, they have come a long way in recent years and with lockdown meaning people are spending more time at home, sales have skyrocketed. Bagotte is a Chinese firm that sells a range of household appliances such as air purifiers, juicers and a range of robot vacuum cleaners.

The Bagotte BG800, which we're testing here, is the firm's most premium model and costs £250 on Amazon, with the BG700 and BG600 models priced at £225 and £150 respectively. But the BG800 stands out thanks to its all singing and dancing features — including a dual navigation system that uses a dual gyroscope and optical tracking navigation technology so that the vacuum cleans in a straight line instead of a random pattern.

It comes with a remote control, although most people will control it via the easy-to-use Bagotte app where you can program schedules and cleaning paths. It can also be switched on with voice control via Amazon Alexa or Google Assistant.

According to Bagotte, the BG800 will clean floors of over 500 square feet in around 40 to 50 minutes, and the unit then returns to the charging base automatically when the job is done. Included in the box are the docking station and a roll of magnetic tape to prevent the vacuum from going places you don't want it. 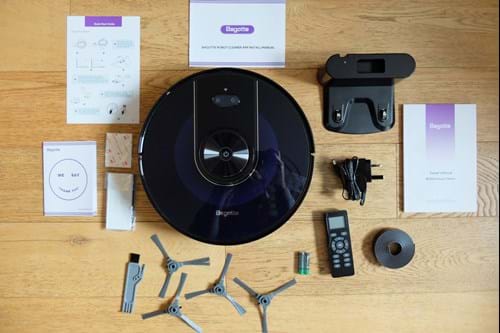 Get it out of the box and the first thing you notice is that the Bagotte BG800 is a hefty bit of kit compared to other robot vacuums we've tested. It weighs 2kg more than the Eufy RoboVac 11S, tipping the scales at 4.5kg. Yet it has the same low profile (it's just 2.7 inches high) so it can get under most furniture and units around the house.

The key thing we're looking for here is the ease of set up and the BG800 ticks the right boxes. Plug the charging unit into the mains, flip the switch on the base and once you've downloaded the app, connect it to the WiFi. Et voila — you're ready to go. It takes about an hour to charge initially (it comes partly charged) and then all you need to do is press go and off it sets.

With 2200Pa of suction power, it's more powerful than any other Bagotte model, as well as the Eufy RoboVac 30C we've previously tested — which is very handy if you're in a constant battle against pet hair. It's very thorough too, the BG800 maps its way around the house (you can see where it's been on the app) for a main clean and once finished it will then go around the edges, cleaning those with its special side brush. Usefully, you get three spare brushes in the box along with a spare HEPA filter. There's also a triple filter system to keep allergens and the like away.

With a run time of two hours, the BG800 has plenty of battery power, and it should be able to clean 50 square feet in less than an hour. We tested it on the ground floor of our house, which is open plan with a mix of solid wood flooring and several rugs, plus tiles in the kitchen. 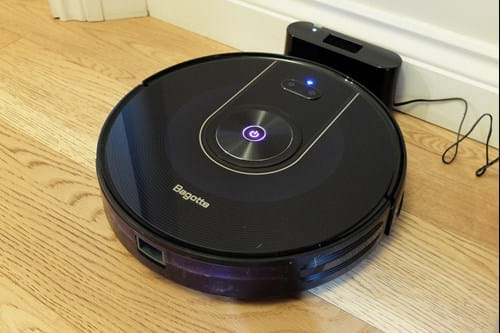 Bagotte says the BG800 is designed for low/medium-pile carpets, tiles, laminate and hard floors. It's not suitable for high carpets though. Of course, as with any robot vacuum you have to remember to move things like shoes, pet bowls and kitchen chairs out of the way, as well as being aware of cables (which it'll try to suck up).

While the BG800 may happily go under your TV unit, it will also happily get tangled up in all the wires. The solution here is to either get a cable tidy tube or use the magnetic tape that's supplied with the vacuum. This stops the unit from going where you don't want it, so is handy for things like utility rooms or around shoe racks.

We found the BG800 to be an impressive bit of kit and deals incredibly well when changing from hard floors to rugs, even coping well with a particularly thick rug by our fireplace. The first few times we used it, it did occasionally get stuck, but this is very much trial and error. We discovered it doesn't like office chairs and if you leave a door half-open, it can get trapped in a room, knocking the door closed and then not being able to get out. Once you remember to clear these sorts of obstacles, the unit will whizz around happily.

At 55dB it's reasonably quiet, although you wouldn't want it on in the room while you're watching the cliffhanging climax to that long-running BBC police drama. Ours is programmed daily at 3pm during school run time, although the dog is not a fan. True, it does make quite a clack as it runs up and down the stone kitchen floor tiles, but generally, it's a lot quieter than a full-size vacuum. 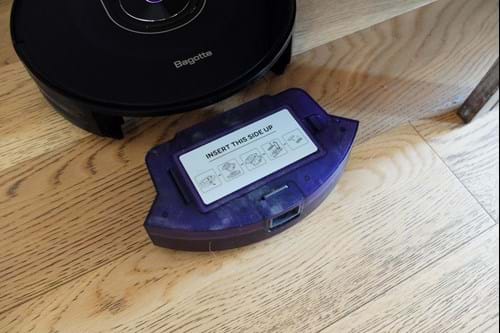 As for reliability, the BG800 has been pretty good. There have been a few occasions when it's not been able to find its way back to the docking station and seems to get a bit confused, plus we have had to reconnect it to the WiFi network once after it stopped working. But it's no different to when Netflix decides not to work properly.

The two hours run time (in auto mode) is more than enough to cover the ground floor of our house, although you can change that to 'big' if you want more suction. There's also a setting to just do the edges. One really useful feature of the app is that it shows you the lifespan of the side brush, the main rotating brush and the filter, so you know when they need cleaning or replacing.

As far as robot vacuum cleaners go, the Bagotte BG800 is one of the best on the market. It has impressive suction power, more than most of the competition, while its two-hour run time should be enough for all but the biggest houses. There's also the intuitive app, which makes it a doddle to operate — while the clever tracking navigation technology means it cleans efficiently.

The £250 price may seem quite high, but given the features and functionality, we think it's actually very good value for money. Yes, you could get something cheaper, but it won't perform as well as the BG800. Also, when you consider Dyson's Heurist robotic vaccum is £800, the Bagotte seems very affordable in comparison. 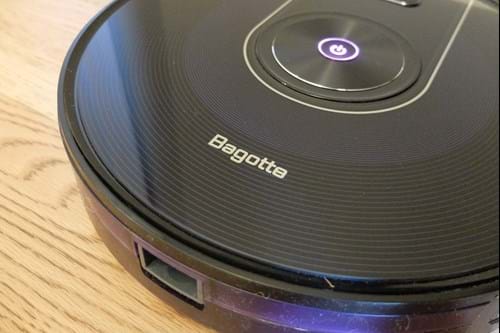 Run time on a single charge: 120 minutes in Standard Mode.