Seat could be comfier

Retro roadster, streetfighter, super naked, cruiser? The Honda CB1000R could be all of those things, yet it still manages to blaze its own trail. Honda calls it a Neo Sports Café bike, and we’re not going to argue as it sums up this latest big CB as well as any other conflation of words and phrases.

More important than pigeon-holing the CB is understanding what it can do and the quality of its construction. Here is a bike that enshrines all of Honda’s obsession with detail and construction in a single product, as well letting the Japanese designers loose with some styling touches. As for the motive force, it comes from an updated version of the previous CB1000’s 998cc motor with more power and less weight to push around. 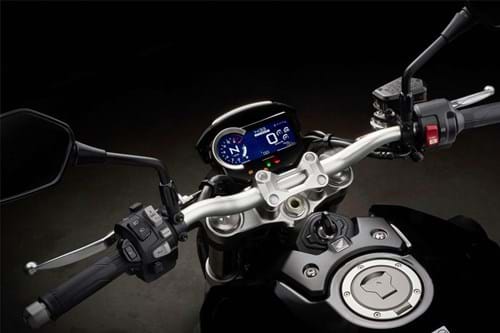 There’s a great deal to take in when considering the Honda CB1000R, and not just because of its big presence. For starters, there are all the little details to this bike, such as the unusual headlight that manages to look futuristic and retro at the same time. It’s the same with the LCD dash display, 10-spoke alloy wheels and dual pipe exhaust silencer. Somehow it all comes together to create a bike that’s much more than the sum of its parts.

Sling your leg over the saddle, which is 830mm from the ground so not ideal for those with a shorter inside leg, and the impression of quality continues. The seat is quite thin but has enough padding to deal with the rides most CB owners will use it for – commuting, back road blasts and just heading to the shops for the sake of enjoying this bike. Spend more than a couple of hours on it, though, and you realise touring is not the CB100R’s forte.

No matter, the riding position is forget-about-it natural, so you simply get on with firing up the ignition. This brings that LCD screen to life, which shows all of the vital information clearly and without some of the flashy histrionics of others in this corner of the market. Curiously, starting is done by a key being twisted in the ignition barrel rather than a keyless system as you might expect on a bike of this price and pitch. However, it works, so don’t knock it. 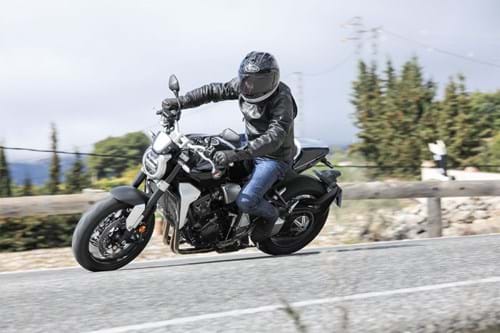 Turn the key to fire up the 998cc motor and it’s a cracker. Still based on the 2006 Fireblade unit rather than a newer version, it now boasts 12bhp more than its predecessor and has more torque too. Not only that, the power is spread across the whole range and the rev limit has been raised from the old CB’s 10,300rpm to 11,500rpm.

Combined with 4% shorter gearing, the effect is sensational when you open up the throttle on this CB100R. It pulls with the sort of force only a big bore machine can generate, but it feels even brawnier, almost like the engine has an extra 400cc hidden away in its depths. Some of Honda’s rivals may muster more horsepower, but none will outrun on the road.

It sounds great once the motor is spinning past 5500rpm thanks to the sort of growl you want from a big naked machine like this. Varying the throttle input is perfectly smooth thanks to the drive-by-wire system that Honda has ironed out any kinks from. 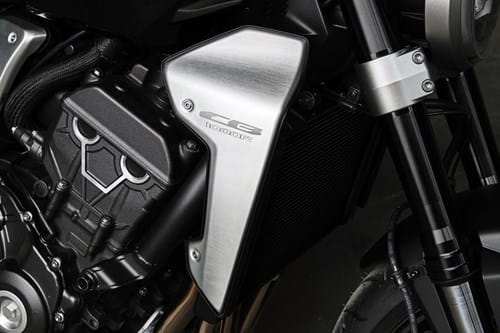 Mix that with the Assist/Slipper Clutch and you can make rapid changes to keep the engine howling or potter smoothly. There are also three riding modes on offer, comprising Standard, Rain and Sport, plus a User setting to let you dial in and save your own preferences for the traction and torque controls and engine braking.

During our time on the CB1000R, we tended to stick with the Standard set-up as it suits most roads ideally. If you come across a quiet, well-surfaced stretch it’s easy to flick into Sport for a bit more fun. Whichever mode you need, the CB100R handles well and has an agility that belies its size and weight, though it now tips the scales at 12kg less than its predecessor. This helps when leaning into a bend where the steering feels quick, neutral and planted. Feed in the power for the exit and that balanced stance carries through.

The suspension is more than capable of dealing with the usual mockery of a surface we find in the UK, so the Honda slips along with its feathers well and truly unruffled. That makes it a shame the seat isn’t more comfy on longer trips as the CB could make a very able tourer to add to its considerable charms. It also has powerful brakes that aren’t fazed by putting a pillion on the back. 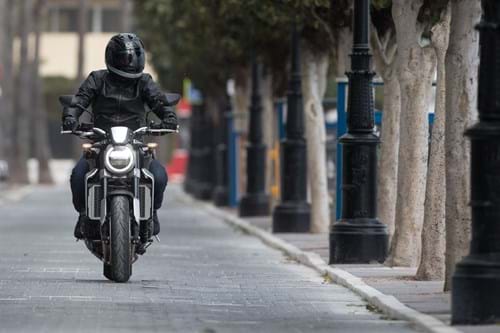 You’ll have gathered we like the Honda CB1000R. It’s very much a bike for the real world, where a huge top speed is far less important than off the line grunt, stability and comfort. The Honda has all of that in abundance, as well as its cool looks and the feeling this is all effortlessly achieved rather than contrived.

The standard CB1000R comes with just enough kit to make the price feel okay, but we reckon the + model that adds £1000 to the final tally is the one to have. It comes with heated grips, flyscreen, quickshifter gearchange and various aluminium panels to highlight the bike’s looks.

Next to some very talented rivals, the Honda might have previously seemed like the safe, sensible choice. The CB remains this in as much as it will be reliable and glitch-free to own, ride and use, but it now has a sense of occasion that puts it right at the top of its class. 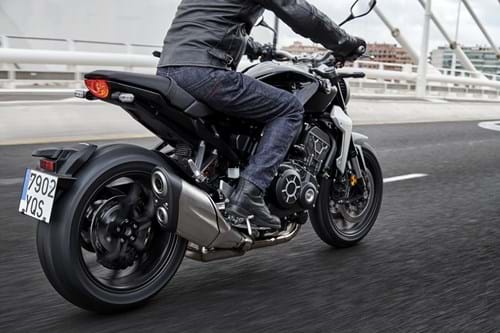