The Lexmoto Enigma is the essence of the 125cc scooter, the sort of machine a 17-year old can buy on the proceeds of a summer job. This is thanks to the Enigma’s temptingly low price of £1499 before you add any extras. There are some cheaper 125cc scooters out there, but none have the looks of the Lexmoto that will convince a fresh-faced rider toting an A1 licence in the same way as the Enigma.

That wallet-friendly price shouldn’t put you off as it doesn’t mean giving up on quality, either in the build or riding experience. Lexmoto seems to have found a sweet spot in the middle where the Enigma does without some kit that pricier rivals offer, such as ABS brakes, yet it has all the necessary performance and handling and fun that new riders and commuters look for. 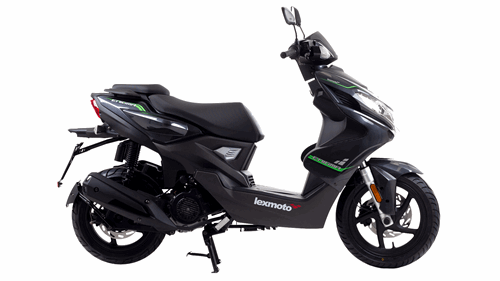 As you walk towards the Lexmoto Enigma 125, it gives off a thoroughly modern vibe in its looks. It stacks up well to that enduring 125cc scooter, the Peugeot Speedfight, which we’d argue appears a little staid next to the Enigma despite the French machine costing £1200 more. Think of other similar scooters and the price differential increases even further, yet the RRP should not be what dominates your decision-making process when choosing the Enigma, it’s just a happy bonus.

Setting price aside, the Enigma’s looks are more than just skin deep and there’s some considerable thought gone into the design. For starters, the front indicators are blended into the handlebar fairing rather than on stalks so they are protected should the Lexmoto be knocked over when parked. There’s also a centre stand to make the most of those close-packed city bays. 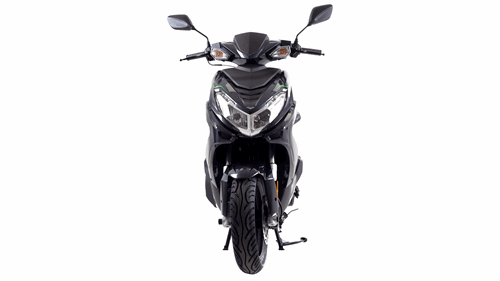 The large headlight gives off a good spread of illumination at night and we found it was more than adequate for town riding and being seen by other traffic. In wet weather, the fairing gives a minimum of protection, so an aftermarket screen is a worthwhile addition for anyone looking to commute on the Enigma. You could also add a top box to boost its carrying capacity, though the underseat storage bin is more than big enough to cope with a full-face helmet and it’s easy to access this space underneath the flip-up seat.

Sling a leg through the central section of the Enigma and the riding position is typically high-set for this style of scooter. Anyone with shorter legs might have to make do with only putting down one foot as they come to a stop, but the light weight of the Enigma means that’s never a worry. The high seating position gives a good view ahead and the rear-view mirrors offer a reasonable image of what’s behind without much blur. Behind the rider, the pillion gets a more bum deal as the saddle is quite small and the foot pegs are integrated into the toe board, so it’s not the most accommodating passenger seat.

In front of the rider is the single dash instrument, which is a round digital display that manages to be simple yet modern. It shows speed in a big, bold number, so you only have to glance to tell if you’re inside the prescribed limit. There’s the usual switchgear for indicators, horn, lights and starter, so no need to familiarise yourself before heading out on the road.

Crank up the four-stroke 125cc single-cylinder engine and the Enigma doesn’t make a lot of noise. The yoof contingent may want a louder exhaust, but the standard Euro 4-compliant set-up is ideal for not upsetting the neighbours first thing in the morning. It also ponies up more performance than you might initially expect as its 9.4hp only has to shift 121kg plus rider, so it’s quite sparky off the line and up to 40mph. 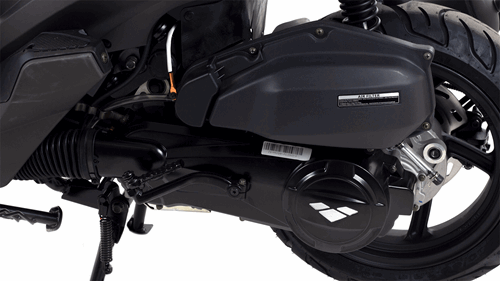 A turn of pace like that makes the Lexmoto ideal for urban journeys, which is where it’s intended to excel. Top whack is 60mph, so you could travel further afield if needed and the engine is happy to whirr away smoothly. Ridden in mixed conditions, we saw fuel consumption close to the claimed 100mpg combined average.

Another point in favour of the Enigma as a sound city choice is its 14-inch wheels and tyres. These are an inch or two larger than most scooters in this class and endow the Lexmoto with ride quality way beyond what most rivals can offer. It also means the Enigma handles with a neatness and precision that lets you conserve speed through corners rather than having to scrub it off with the linked front and rear disc brakes.

If you’re wedded to the idea of owning a 125cc scooter for a very long time, it’s probably worth spending more to gain some added equipment that isn’t offered with the Lexmoto Enigma 125. However, if what you want or need is a cost-effective, fine-riding scooter with low running costs, there are few that can compare. There are a couple of areas where the bargain price shows in the quality of fit and finish and there’s no ABS, but otherwise, the Enigma is sound in almost every department you can name.

It would be good if the pillion seat offered more space and comfort, but the Lexmoto handles well and deals with lumpy roads more effectively than the majority in this class. The good looks and smooth engine are also appealing factors that contribute to this being one of the best value scooters money can buy. 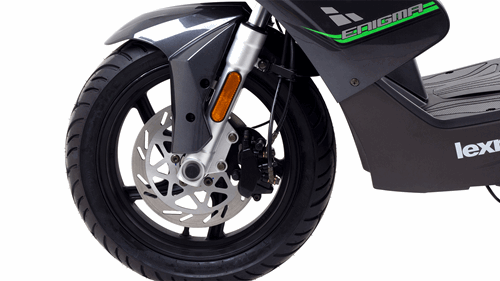