In case you don't already know, a dehumidifier is designed to prevent condensation and rising damp forming indoors by stopping air from becoming too humid. It essentially sucks in moisture to make the air around you more comfortable to breathe, which also prevents respiratory problems caused by damp environments, and then releases the dehumidified air back into the room.

The Meaco Zambezi dehumidifier is a desiccant variant. Basically, that means this dehumidifier is better for colder environments - which makes it ideal for use in the winter when people crank up the temperatures at home and humidity levels rise. It's also useful for car owners who don't want humid air in the garage causing their pride and joy to go rusty, or the seats to go mouldy.

The best dehumidifiers work quickly without costing you too much in energy bills. So, does the Meaco DD8L fit that bill? 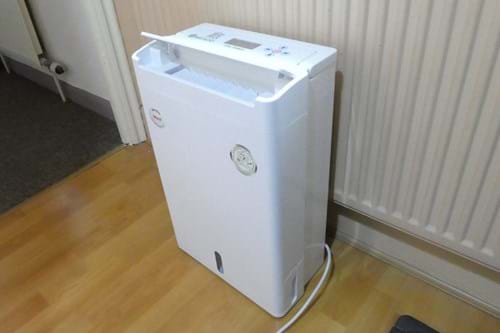 Like all good companies, Meaco listens to their customers. When it came to designing this dehumidifier, consumer feedback was used to make it exceptionally simple to use and energy efficient. The unit is 548 x 358 x 200mm, which is roughly knee-high for this 5'7" product reviewer. It isn't the smallest dehumidifier on the market, but it can adsorb (slightly different to absorb) over 8 litres of water per day and fits well into corners.

Weighing in at 7.8kg, the Meaco DD8L isn't much heavier than a bag of shopping - plus it has a fold-down handle that makes it very easy to move around to different rooms. As for the slightly unusual name, Zambezi refers to a baby elephant that was rescued in by the David Shepherd Wildlife Foundation in Zambia. Meaco donates £2 from every sale of the Zambezi to this foundation. A cartoon of Zambezi is displayed on the LCD display and on top of the dehumidifier.

This table shows the full breakdown of spending you can expect:

Meaco claims the Zambezi offers more functionality and control than other domestic dehumidifiers on the market. And, from our testing of the unit, the Meaco Zambezi sure does do a lot. The display can look a bit mystifying at first glance, but it only takes a browse of the included manual to get to grips with the settings. Highlights include Meaco's Energy Saving Laundry+ mode, a sterilising ioniser and a Daily Run Timer - all of which Meaco say is exclusive to this unit.

The Zambezi is the first desiccant dehumidifier to come with a digital display, which attempts to simplify a wealth of features that were requested by customers during its design process. As you can see in the picture below, the DD8L displays the room's relative humidity and temperature alongside the target humidity you select (between 40% and 70% in 5% increments), as well as the temperature (middle number of the three), timer, clock, ioniser and fan speed (ranging from one to three). 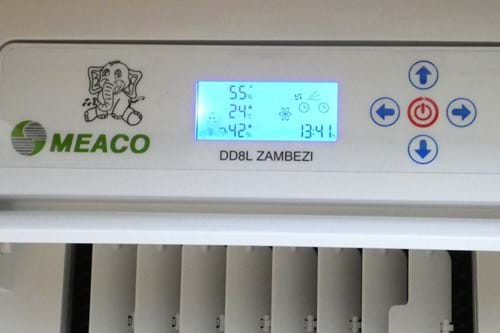 Our washing machine is in a little room on the back of our house, which means it gets very cold. This type of dehumidifier is perfect for that kind of environment. Usually, when we hang our washing on the radiator, the windows steam up - but using the Zambezi meant that didn't happen. This is very useful because it means mould won't begin to grow where the condensation builds up in the corner of the windows.

We also use it a lot upstairs. While we don't have a damp problem in our house, the steam from the shower often makes our bathroom feel stuffy in winter - but the DD8L has left a noticeably fresher feeling to the air in the bathroom. The anti-bacterial filter on the back of the unit is also very easy to remove so you can vacuum off any dust or the like.

Meaco's sterilising ioniser technology gets rid of bacteria, dust and mould, essentially removing the germs that lead to health issues - which is very useful if you or your family suffer from allergies or asthma. If the relative humidity in the room increases above 70%, the Zambezi will also ask you to turn it on in order to bring the humidity back down to a more comfortable level as part of the oddly-named Turn Me On feature. 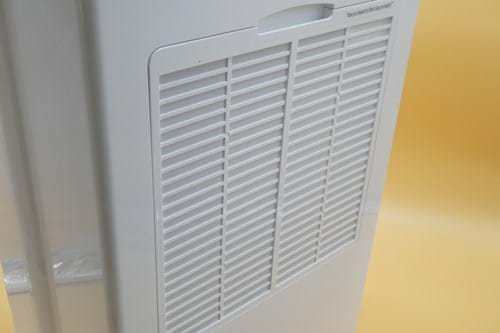 If you don't already think it's smart, the Meaco dehumidifier also has a 20+ logic system, which is very useful for dehumidifier newbies who don't know how to set up their unit effectively. The feature detects if the humidity has risen 20% above what you've set it to and then temporarily boosts the fan speed to bring the humidity under control. It then reduces its speed to your previous setting, which means you get optimum results without needing to keep an eye on the settings.

Other impressive features include a child lock on the unit's display screen, anti-mould coating on the water tank and an anti-blockage system. The anti-blockage system means if the unit suffers a leak, it doesn't need to be sent back to Meaco because you can sort the issue yourself. When the three-litre tank needs to be drained, the unit will beep and show the tank full icon - with the handles at the side making it easy to slide out.

However, unlike the main unit, there's no carry handle on the water tank - which can be a bit of a pain. Or you can use the supplied hose for continuous drainage rather than faffing about emptying the tank. After the Zambezi is turned off, the fan will run for about 10 minutes (which confused us at first). This is to ensure the heating element cools down fully, which extends the lifespan of the device. Smart stuff... 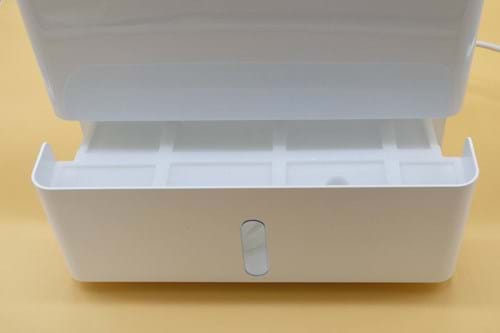 Humidity can be caused by moisture seeping in from outside, like through wall cracks and broken seals, and from indoor sources like tumble dryers and steam from showers. Symptoms like condensation in windows can cause trouble ranging from mouldy walls and ceilings, which encourage the growth of fungi, to health issues like asthma. That's reason enough to want to control the humidity of the air in your home, office etc. And for those with a car they want to protect during colder months, there's even more reason to buy a dehumidifier like the Meaco Zambezi.

The DD8L Zambezi is arguably the most feature-packed, advanced desiccant dehumidifier around. That fact goes some way to explaining why it's priced higher than other brands. It's not perfect, it can be a bit noisy with the fans on maximum speed and - without instructions - the settings on the display can be a bit tricky to configure.

If you only need to dehumidify one warm room, then a refrigerant (also known as a condenser) dehumidifier would be a more economical pick, but if you also want to dehumidify colder environments, we highly recommend the Zambezi. It's our pick of the best all-round dehumidifier you can buy.

Pros Packed with useful features like Energy Saving Laundry+ mode and a Daily Run Timer Does an excellent job of improving air quality Ideal for cold environments, like cold garages for those who want to protect their cars
Cons A tad noisy with fans at full speed Bulkier than other units Pricey