Wires protruding from the side are unsightly and distracting

The A129 Duo is a dual dash camera from Viofo, which is the same company that manufactures the popular A119 dash cam. The A129 Duo captures footage in 1080P at 30fps - in both front and rear camera - which is better than the average 720p for a rear camera. The A129 Duo also features WiFi and GPS to track your speed and location, plus date and time, which is very helpful when it comes to speeding up an insurance claim.

Viofo's dual dash cam is a good offering for the price on paper, but how does it compare to the cheaper Z-Edge T4 Dual dash cam?

Setting up the Viofo A129 Duo isn't complicated enough to need to flick through the user manual, thankfully. In the box, we get the front and rear dash cameras as well as the relevant cables, some adhesive mounts, clips to attach the wires into the lining of the car (to stop cables trailing about), CPL (circular polarising filter), adhesive mount tool and a manual. 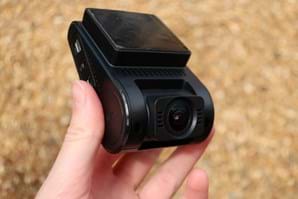 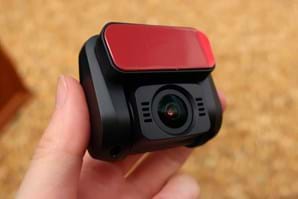 A smartphone app called Viofo is also available to review videos (available for iOS and Android). Both front and rear cameras record in 1080P at 30fps, which is above average for dash cams. Generally, dual cameras will have the front record in higher quality than the rear - i.e. front: 1440p or 1080p and rear: 720p). Both cameras attach via adhesive mounts and can pivot up and down but not sideways.

While the style of mount isn't the be-all and end-all, we personally prefer suction mounts because they can be moved easily from one vehicle to another and moved to a different windscreen placement as well. The box includes a mount detacher tool, which looks like a LEGO brick separator. In our experience, the tool did work but it took a lot of effort to remove the cameras after we were done testing them. The adhesive mounts also lose their stickiness after removal so can't be used again. With that in mind, make sure you know where you want them before you attach them.

Once attached, the angle of the dash cam doesn't make seeing the screen very easy. This isn't an issue for when you're driving considering you shouldn't look at the 2-inch screen when the car is moving, but it does make fitting the camera a bit more difficult because you can't see if it's placed correctly as easily as with a dash cam like the Garmin 66W. 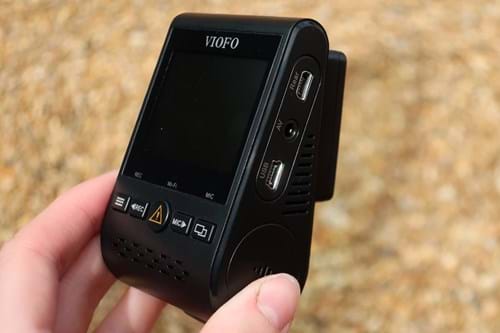 On the front of the dash camera, there are five buttons; menu, recording, emergency, mic/mute and dual-screen. These are fairly self-explanatory with the menu allowing us to adjust settings and the emergency button being pushed - in theory - after an accident to ensure the footage isn't written over. However, the G-Sensor should detect a collision and save the file regardless.

The optional polarising filter is used to reduce glare in footage from things like sunshine as well as headlights and streetlights that can block out licence plates in video recordings. Although, our footage doesn't include the polarising filter on the front camera. You can buy the filter separately or pay a bit extra and get it included in the dual dash cam bundle.

Aside from the awful reflection from our very shiny dashboard, the quality of footage captured by the A129 is very decent with the date, time, speed (in KHM rather than MPH because we hadn't changed it yet) and location stamped onto the footage. The rear camera is also easy to set up, just make sure the angle is correct because this takes a bit of trial and error.

One of our main issue with the camera is that the ports for the wires are both on the right side of the front camera. As you can see in the photo below, both the charging cable and the chunky cable that connects the front and rear have to be plugged in on the right - which makes placing the camera fairly tricky because there isn't space for two wires to fit into the interior trim of the car.

The setup just doesn't seem quite as well thought out as it could be considering that if the ports were on the left of the camera, they wouldn't protrude out like they do and take up space on the windscreen. To solve this, we'd suggest getting the camera hardwired somewhere like Halfords using the hardwiring kit. Otherwise, you'll end up with at least one wire dangling down or trailing across your car. Hardwiring also means you can use the camera's Parking Mode.

The dash cam we think best rivals the Viofo A129 Duo is the Z-Edge T4 Dual, a front and rear dash camera setup that also records in 1080p at 30fps. If you run the front camera of the T4 without the rear camera connected, this is upped to 1440p at 30fps. If you click on the hyperlink, you can see the T4's footage in the review.

The T4 features a 155-degree angle view from both cameras, which trumps the 140-degree wide viewing angle than the A129, and the T4 comes with a 32GB micro SD card included. However, there's no WiFi or GPS so it will not record your speed or location. The T4 is slightly cheaper than the Z129 Duo, so it really depends on what you're willing to sacrifice. 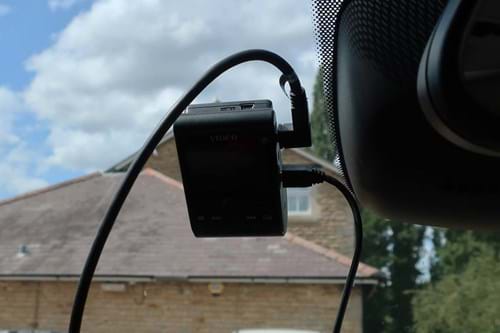 Both front and rear A129 Duo cameras have quick-release mounts, although it can take a bit of force to attach and detach them. The Viofo A129 Duo takes Micro SD cards (Class 10 up to 256GB), but no MicroSD is included so make sure you buy one before you want to use the dash camera. The 32GB SanDisk Ultra microSD with an SD Adapter is currently discounted to about £5.

The Viofo A129 Duo captures decent quality footage from both the front and rear camera, as well as providing useful features like parking mode and GPS. While we don't think the A129 Duo offers the best quality footage of the most features of any dual dash cam, we do think it's possibly the best value dual-camera setup we've tested.

However, despite the set-up being fairly simple, the wires protruding from the right side ports made the front camera difficult to place without it blocking part of the windscreen. It would make sense to have this set up in a left-hand drive car, however, if we were to place the dash cam on the right-hand side of our car so the wires could be clipped into the interior trim lining, it would distract us when we drive.

Alternatives we would consider include the Z-Edge T4 Dual or the Z-Edge Z3D - which is a GPS-enabled dual dash camera which we haven't yet tested. However, the Z3D is cheaper at about £100. Another dual camera option would be the Nextbase 322GW (£95) with a Nextbase rear camera module (£32).

The 322GW features GPS, WiFi, Intelligent Parking Mode, Emergency SOS and Alexa voice assistance. Resolution for the 322GW is 1080p HD at 60fps with a 140-degree viewing angle, which drops to 1080p (front) and 720p (rear) when used as a dual dash cam. To get the same features plus 1080p footage resolution front and rear, you'd need to opt for the pricier Nextbase 422GW with a Nextbase rear camera module.