Uses the Family Fix base compatible with other Maxi Cosi seats

Suitable from birth to around 13kg or 12 months

Maxi Cosi is a name you’ll keep coming across when you're looking for car seats - the brand has a wide range and is one of the best known car seat brands around.

The Pebble is the mid-range Group 0+ model designed for babies until they are around 12 months old or 13kg. It’s often sold as part of a package, bundled together with an Isofix base or even a complete travel solution such as a pushchair. A wide range of prams are designed so you can slot the Maxi Cosi seats onto the base, often with a pair of adaptors as is the case with the Pebble.

It’s not i-size compliant (the new safety standard that will run alongside the current laws), though – if you want that extra certification you need to go for the slightly more expensive Pebble Plus.

One of the most appealing factors for many considering the Pebble won’t be the seat at all, but the base on which it sits. Not only can you put the Pebble onto the Maxi Cosi Family Fix base for the first year of your child’s life, but the same base will accommodate the larger Pearl, which should be good until they are around four years old. The base comes with a support leg and an adjuster to alter the seat angle, but no rebound bar. 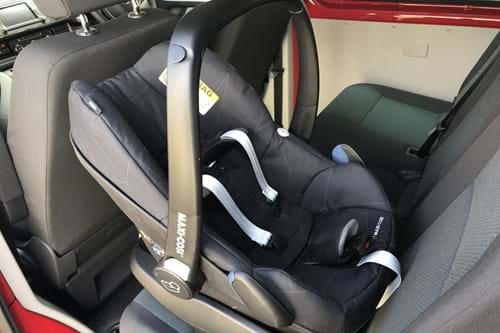 There is a reassuring solidity to the Pebble when you first get it out of the box, but this doesn’t translate into a feeling of heaviness. At 4.5kg it is lighter than other Group 0+ seats from Britax and Joie, although there are lighter rivals out there if that is your top priority.

If you're fitting it on Isofix points, you'll need the Family Fix base, which costs another £140. It's also quite hefty and weighs a notable 6.85kg, which means that moving it from car to car isn’t as easy as it is with a Joie base, which weighs almost 2kg less. The Isofix arms at the side of the Family Fix base are quite tricky to extend, too, with the buttons requiring some real force to get them all the way in.

Once the arms are locked onto the Isofix loops, it’s very easy to get the leg adjusted to the right length and ensure the seat is properly seated, thanks largely to the light and beep-based system that sounds to let you know when it is properly installed.

If you aren’t using Isofix then the guiding slots on the back and on the top of the seat mean that it is virtually impossible to get the seat belt in the wrong place. Not only do they guide the belt in place, they hold it there, too. 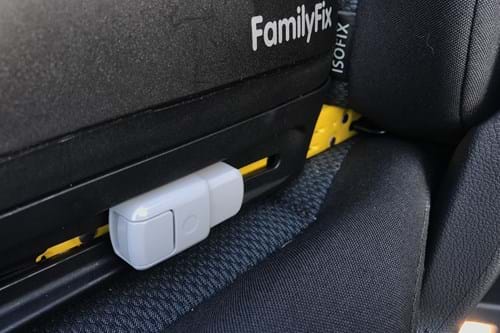 The seat itself feels well-padded and supportive, despite the lack of i-Size accreditation. The infant inserts are small and easily popped in, although this might make them easily misplaced, too.

The large padding around the buckle provides a decent barrier between little one and the plastic of the fastening plus the strap buckles are as easy to clasp together and clasp into the fastener.

The straps themselves are remarkably easy to adjust for length, though. When they aren’t fastened you simply pull them lightly to lengthen them and when your child is sat in place you can gently tighten to the correct amount by pulling on the strap at the base. There are no clever tricks to keep the buckles out of the way when you are popping your child into the seat, though – it’s just a case of dangling them over the side and hoping they don’t get swept under with any wriggling.

One downside to the seat itself is the lack of adjustment – there is no ability to lay the seat flatter or sit larger infants slightly more upright. 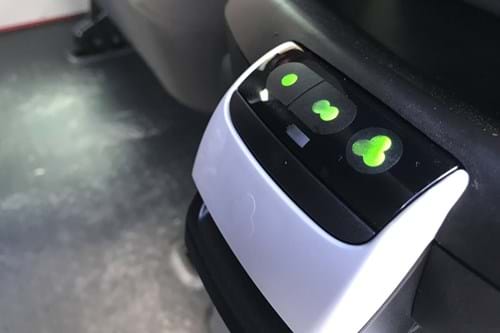 The hefty arm over the top makes taking the seat out of the car easy – it’s chunky and easily moved into position by the two buttons on either side at the pivot points. If you are taking it out of the car and popping it onto a pram base then it is easiest to put the adaptors onto the base and then slot the seat on top – it takes a bit of precision, but it is possible one handed.

Getting the chair off the adaptors isn’t so easy – you need to push down another set of buttons on either side of the chair and lift at the same time. This is a slightly fiddly action that is trickier for those with smaller hands. Other systems on rivals like the Joie are easier to use. 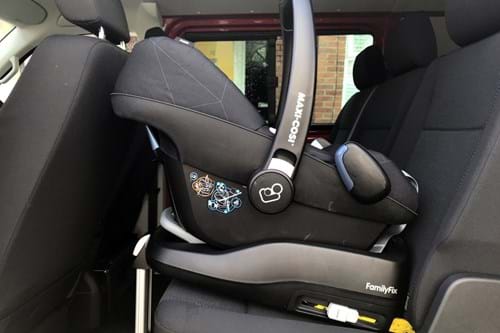 The Maxi Cosi Pebble is a great solid option as a first car seat, with very few fiddly extras to worry about on a first journey home from hospital and reassuringly few settings to fret over as your child grows.

Although this lack of adjustability means that babies will outgrow the seat entirely within around a year, the Family Fix base means that you don’t need to buy a whole new system if you decide to buy a Pearl to follow the Pebble. The downside of that is that the Pearl is front facing – something that not everyone will want for a child aged around a year. It’s fine - and legal - but rear-facing is that bit safer.

The flexibility and simplicity of the Pebble will win out for many, though, as it can be slotted into a wide range of push chair bases, it is easy to carry without being too heavy and it appears comfortable. We’ve not had any complaints from our main tester in any case.

The fiddly elements are surmountable and not enough to stop the Pebble from being a great all-round option. 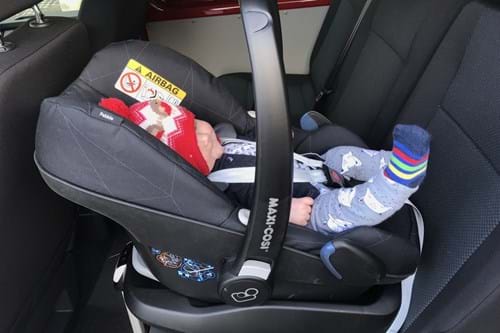