The Aukey HD-C29 is a universal phone cradle with a suction mount. It can be attached either to a windscreen, as is typical, or to the dashboard surface - even if it’s textured. It’s not expensive, with a price of £7.99 on Amazon and while it doesn’t do anything outlandish, it does promise to get the basics right - which is what most people want from a cradle.

An in-car phone cradle might seem like something a travelling printer salesman would use in his Ford Mondeo circa 2001. But there’s arguably more cause to have one now than there was back then, thanks to sat nav apps like Google Maps or Waze (yes, we talk about Waze a lot but it’s very good).

So a sturdy mount is very useful and the HD-C29 is up there with the best. The sliding, spring-loaded grip makes getting a phone in and out of the cradle easy, but the rubber elements inside mean the phone doesn’t come loose on the go. But the suction mount is the real standout feature. 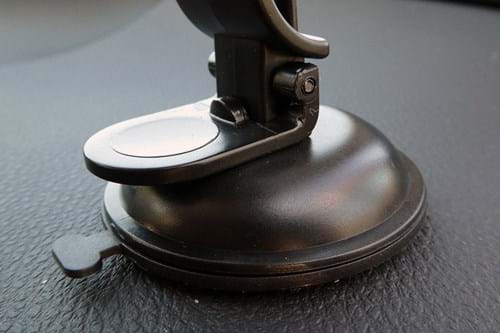 It's happy to stick to hard or soft-touch textured plastics

It doesn’t just stick to glass, like most, but it attaches to textured plastics too, like the dashboard top. And it works properly too. In testing we removed and reattached the cradle several times before finding a final position and then left it in place for three weeks, with no sign of working its way loose – and if it does start to lose its stickiness it can be restored with a quick rinse.

That said, the majority of testing was with a fairly light and quite small phone – so we tried with a bigger phone. The suction mount still coped will with an iPhone 7 Plus, but the ball mechanism was more prone to wobbling around over lumps and bumps – something that wasn’t any problem at all with the lighter, standard-sized iPhone.

But if you have a smaller phone it’s a very solid, well-made, easy-to-use and cheap phone mount. For £8 it’s hard to fault – but if you have a bigger “phablet” style phone you might have a few problems with it jiggling around and possibly coming loose on bumpy roads.