Footage is darker when using both cameras simultaneously

The 512GW (GPS WiFi) offers high-resolution video quality and a built-in WiFi system for easily accessing video clips on a smartphone. It has a Sony image sensor that promises clarity, stronger colours and better night time image quality. Plus it has the benefit of a polarising filter and six-layer glass lens for reduced glare and sharper video. Maximum resolution is 1440p at 30fps, but it will also shoot in 1080p at a faster 60fps.

You can also add a rear camera, called the 512GWRC (GPS WiFi Rear Camera), which costs £50 (although it's about £30 here). Both cameras record simultaneously in 1080P at 30fps, offering front and rear protection against liability claims in case your car is rear-ended. 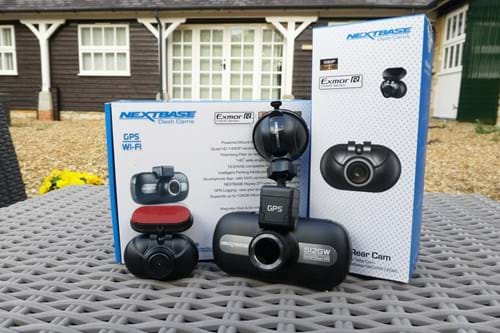 Inside the 512GW box is the unit itself, an in-car power connector with a 12/24V accessory plug, the Click & Go mount, a software CD, a window sticker and some paperwork. Inside the rear cam box, you'll get the camera, 6m connection cable, spare 3M adhesive pad and a Quick Start Guide. Nextbase doesn’t include memory cards, so you’ll need to buy one. The 512GW supports MicroSD cards.

The dash camera itself is really well constructed with a hefty and durable feel. The buttons for the interface are clearly labelled, but they are touch sensitive rather than the physical, click type. That might put some off, but they do glow when being pressed and are responsive. On the side of the 512GW is a microSD slot.

The rear dash cam, which turns the 512GW into a dual dash cam, is also a useful tool in the event of an accident because you can check the footage to see if they were driving too close or were distracted (like using their phone while driving). This footage can be used to then settle an insurance claim. 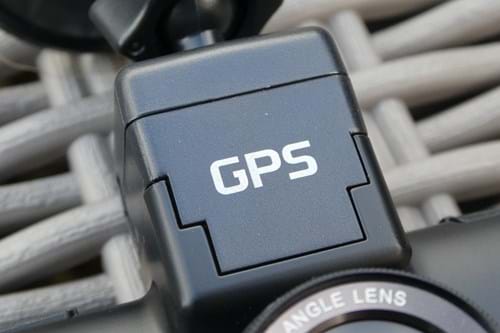 Navigating through the various settings menus is simple since everything on-screen is clearly labelled. There are plenty of things to adjust, including settings for the frame rate and resolution, as well as switching audio recording on and off or setting a number plate for the camera car.

Things like parking mode, which records for a predetermined period of time when the car is parked, can be switched on and off too. Setting up the camera is easy – the Click and Go mount, which features the GPS, hooks up to the power so the dash camera can be removed from the car without moving the wiring and mount or messing up that perfect camera angle.

The front cam is attached via a suction mount, while the rear camera is attached the rear windscreen via adhesive mount - which means it shouldn't ever fall off even if you slam your boot door hard. However, the mount is very, very adhesive so make sure you get it in the right place first time because it's very difficult to remove. When you set up the front dash cam, it'll ask what position it's placed (top left, top right etc) too. 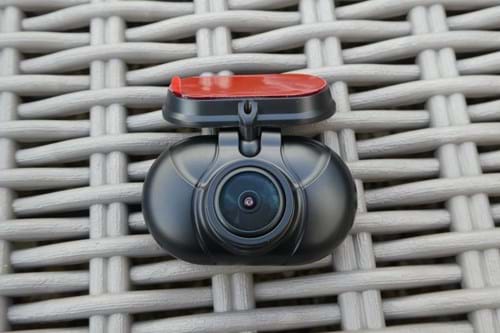 We’d recommend hard wiring the dash camera since it hides away the wires and leaves the 12V socket free for charging phones. It costs very little from retailers like Halfords and is certainly worth considering, particularly since the Click and Go system means it’s so easy to hide the camera away from prying eyes – just unclip it and put it in the glovebox.

The image quality of the 512GW is good in all kinds of different conditions including bright sunlight, rain and darkness. It’s easy to make out details like signs, the makes and models of cars, along with number plates. The field of view is 140 degrees, which is wide enough to capture a broad area ahead of the car.

However, with the rear cam attached, the footage quality drops from 1440P to 1080P, which means footage can become very dark (as you'll see in the video lower down in this review. 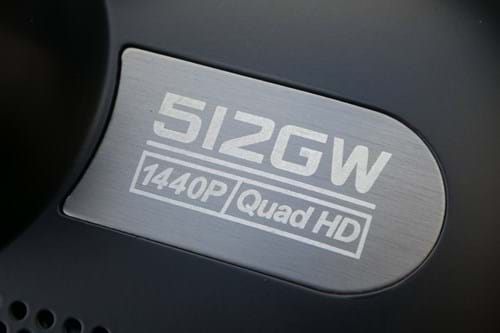 Accessing footage when on the move is very easy, thanks to the updated Nextbase app. It’s slick and intuitive, showing all the footage that’s in the camera on your Android or iPhone. Once you’ve found the clip you want, it can be downloaded in high definition, then uploaded to the web or sent to an insurer.

A GPS sensor is built-in, so information about location and speed is saved alongside the footage. This then allows the PC software to plot the location of the car on a map, which is a useful extra feature for proving where you were driving and at what speed to an insurer, should an accident happen.

You can see both front (above) and rear footage (below) that was recorded by the Nextbase 512GW and GWRC at the same time. The footage is very dark when driving into the sun in the morning, which makes it tough to recommend in some ways. Although, when it isn't so bright (when driving through the village in the above video), the footage is a bit lighter and you can see details like reg plates.

At the time of writing, the 512GW (£120) and rear cam (£35) together are £155, which isn't bad for a front and rear camera that record onto one SD card. The simplicity and quality of both cameras are good, but the thick wire that connects the cameras is a little bit tricky to run around the headlining of the car. If you don't clip it up, you could end up with the cable running from the front to the back of your car - which is another reason to recommend hardwiring.

There’s no arguing with the crispness of the video footage it produces - it's fantastic. But the cheaper Nextbase 412GW is a good option, or for more features, the 612GW is top of the range. The reason we would recommend the 512GW dash cam is because it can be turned into a dual dash cam. By connecting the GWRC (rear cam), you get front and rear footage saved onto one SD card, both recording decent 1080P quality footage. 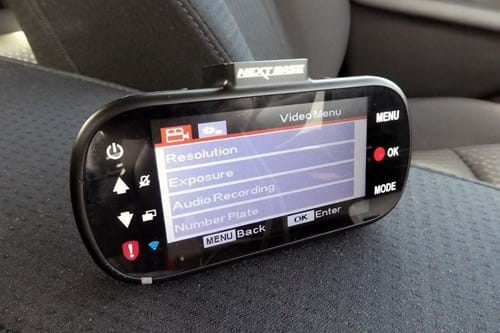 Pros Front camera works well in bright sunlight, rain and darkness (1440P) Nextbase app means you can view footage instantly on your smartphone Works well as a dual dash camera setup
Cons Dual dash cam pushes footage quality down to 1080P Touch rather than physical buttons can be fiddly to use Wiring will trail across your car without hardwiring